BioWare reveals more of Rise of the Hutt Cartel expansion 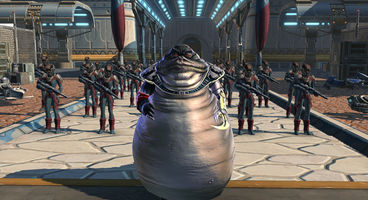 BioWare has revealed more about the upcoming major expansion Rise of the Hutt Cartel for their MMO Star Wars: The Old Republic.

The planet Makeb finds the Republic in the unusual position of being in power, while the Empire is in the unfamiliar position of failure. According to the blog, "exploring how this society might adjust in order to survive their embattled situation was something the writers really enjoyed."

However, Makeb is being slowly controlled by the Hutt cartel, and players will be able to take them on directly. "The increasing aggression of the Hutt Cartel was introduced in our Game Update (Operation: Karagga’s Palace Part II), and we wanted to bring that looming conflict to the forefront on Makeb and give players a chance to face-off with the Cartel once and for all," stated the blog.

The planet itself is unique, being dominated by verdant mesas, but ravaged by "groundquakes". Makeb is described as a "disaster world". According to the blog, "These beautiful stone mesas start to feel like death traps, constantly on the verge of collapsing into the seemingly-bottomless mists below. Entire cities are split in half, with massive fault lines torn directly across streets and through buildings."

Rise of the Hutt Cartel is due to be released this Spring 2013.