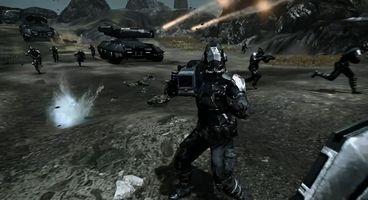 CCP has announced that DUST 514 accounts will finally be migrated into the main EVE Online servers this week on the 10th January, meaning that DUST 514 players will be finally be able to voice chat with EVE Online players, and add mail boxes as well.

According to the blog, "They may look a little funny and talk about bizarre concepts such as tanks, grenades and “running around” but I promise they are as friendly as New Eden citizens can be and want to learn everything they can about this world you now both share."

However, ISK will not be transferable between the two, as CCP doesn't want to wreck the economy with a sudden influx of outside cash.

"DUST mercenaries can accept contracts offered by the NPC Faction Warfare miltias and fight to attack or defend them in the form of corporation battles. These come with the risk of losing a collateral payment of ISK, but a victory will secure a district on one of the many temperate planets in Faction Warfare space. The more districts a militia has control over the fewer victory points will be required for EVE Faction Warfare pilots to take ownership of the system," states the blog.

On the negative side, DUST 514 character skills and corporations will be reset again.

Gamers can check out the newly created FAQ here.