12 July 2013 | By Jonah A. Falcon
Indie developer Reptile has announced that its customizable platformer Megabyte Punch will be released on the 6th August via Desura. The developer also has the game on Steam Greenlight, campaigning to get it approved.

Reptile describes the game as a cross between Super Smash Bros., Megaman and Custom Robo, where players can acquire parts for their character, "like gun arms for a shoot ability or powerful hips for a devastating pelvic thrust attack." Players can then take their customized fighter from single player to an arena tournament.

Gamers can check out the game's Steam Greenlight page here. 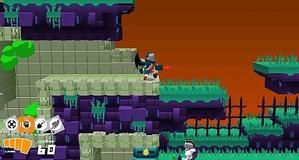