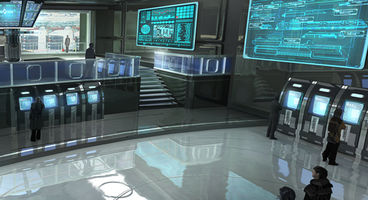 The latest update for Star Citizen's Hangar Module is now available to all with access. The big addition is "client-side persistence" which means changes in the hangar are now permanent.

No more ship loadout resets when you log off and back in again. Most of Update 9's changes are 'under the hood' for future updates. Cloud Imperium also clear up organisation confusion.

While initially Star Citizens will only be able to join a single organisation when the new system goes live in January, that limit will be lifted going forward.

"The big news with today’s patch is that the Hangar now features client-side persistence. That means that the changes you make to your hangar are now permanent: you can change your ship loadouts in the holotable, log off and come back without having them reset!" announced the official Roberts Space Industries website.

"The bulk of today’s changes are “under the hood.” Patch 9 includes a number of bug fixes, but more importantly it sets the stage to incorporate future hangar changes and other Star Citizen modules currently in development. We know it’s not as exciting as a new ship, but it’s essential for what we have in the works. Another public-facing Hangar patch is coming before the end of the year, and it promises to include more for Citizens to play with."

While there may not be any new ships added to the hangar just yet, we do get a shiny new trophy case. "If you have a Gold Ticket on your account, it will now show up there, as will the RSI Zeus model and the 2943 Gamescom trophy. Your fish tanks have also been given a big makeover!"

As for the confusion over membership with multiple organisations...

"We would like to clear up one point of confusion: while you will only be able to join a single Organization with the first iteration of the system coming in January, this limit will be eliminated in future versions."

"Being a member of multiple organization is absolutely necessary for the finished game, and has been in the specifications from day one: players need to be able to join multiple NPC organizations (like the Mercenary’s Guild or Merchant’s Guild) in addition to player created groups."

"There will be a reputation system that tracks how organizations stack up against one another and individual orgs can specify their exclusivity level: the Mavericks might require that you join only allied groups, or they might prevent their members from signing on with anyone else at all. All of this is coming in future versions of the Org system; we aim to get you started with a single group now and then expand as the played-created portion of universe comes together!"

The Hangar Module is the first glimpse of Star Citizen and will soon be joined by the Dogfighting Module, where backers can take their ships with custom loadouts and hunt each other down. Currently Star Citizen is almost half way to its next stretch goal with $34.476 million raised.