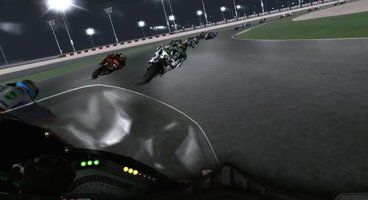 PQube has announced that MotoGP 13 will be arriving on the 21st June 2013 for PC, Xbox 360 and PlayStation 3. The announcement was accompanied by a new trailer showing off the Grand Prix of Qatar.

The Grand Prix of Qatar is described in the press release as such: "The fabulous Losail International Circuit lies on the outskirts of Doha, the capital city of Qatar. The track itself is a flowing layout of 5.4 kilometers, surrounded by artificial grass designed to prevent sand from the neighboring desert from blowing onto the circuit. The main straight is over a kilometer in length and there is a good mix of medium and high-speed corners, including a couple of quick left-handers which has proved particularly popular with the riders. In 2008 Qatar celebrated the first night time Grand Prix in history, following the construction of permanent outdoor lighting. The switch to night time racing was a success and has continued to be so, with the Qatar event now established as one of the most spectacular on the MotoGP calendar."

Check out the gameplay trailer in the video below showing off the racetrack in Doha.