22 August 2013 | By Simon Priest
How does a no name tag extra aboard a space station stave off a horrible demise? They 'Spacebook' their way into earning that nametag, climbing out of obscurity. Positech's Redshirt is now in open beta.

It's a huge parody of virtually every sci-fi trope there is, from Star Trek to Red Dwarf. It's time to put those social networking skills to the ultimate test by 'Liking' your supervisor's cat photos. 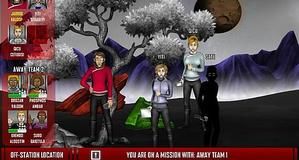