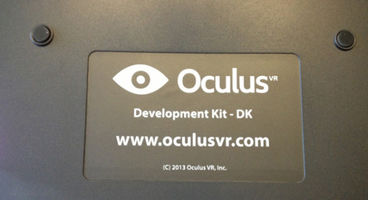 A tweeted pic of an Oculus development kit has been sent out by Respawn Entertainment, the creator of PC and Xbox 360's Titanfall. The studio is "very excited" to play with their new VR toys devices.

Will the EA backed shooter Titanfall, which has a real love for mechs, be supporting the likes of Oculus? Respawn has "nothing official" to declare teasing "you never know."

Titanfall is Respawn's first official project and their sci-fi shooter is bound for PC, Xbox 360 and Xbox One. The studio team appear to be tinkering around with it already.

"We think it's awesome. Collectively. Really neat to play with," tweeted Respawn. Titanfall is due for release in early 2014, with players on foot and piloting mech-style walkers. It's a multiplayer-only shooter with focus on team-based objectives, however there are single-player elements such as story, NPCs and com chatter.