CD Projekt RED discuss combat and signs in The Witcher 3 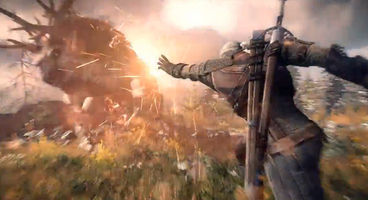 Lead gameplay designer Maciej Szczesnik for The Witcher 3 has revealed Geralt will have a choice between five magic signs at the beginning of the RPG, but new casting modes "effectively double" his options.

Some good ole character development will unlock the new ones, offering some interesting tactical uses. Combat stances will use 96 new character animations.

The studio is also dropping QTE elements of combat for The Witcher 3, and putting greater emphasis on defence and positioning of Geralt during battles.

"At the beginning, Geralt will be able to choose from five signs," Maciej Szczesnik told ClickOnline.

"It doesn’t end there, however – in The Witcher 3 we introduce new casting modes which effectively double the number of signs at the players disposal. These “alternative versions” will be unlocked through character development, but don’t think of them as simply stronger versions of the same spells – they will offer different tactical uses."

“Let’s take Aard as an example. The primary version of this sign will send a telekinetic thrust to stun or knock down foes. With time, players will be able to unlock a secondary version of the sign and by pressing and holding the button, they will send out a shockwave that knocks down all surrounding enemies (you can actually spot this in our gameplay trailer). Similar dual modes are available for every other sign," he continued.

The lead gameplay designer likened the new combat approach as similar to Dark Souls, where you have to battle enemies smartly and exploit your skills - whilst being ever vigilant on defence. No more roll, roll, swipe, roll, roll, swipe? Geralt will definitely be sticking with what he's good at: swords.

"It's a part of who he is," Szcześnik said. "I mean, for us, encouraging players to use polearms, shields or axes would create a dissonance akin to Batman running around with an AK-47 and shooting at his enemies."

"Geralt will have two fighting styles to choose from - a fast one and a strong one, just like in The Witcher 2," he said. "On top of that, he will also perform special attacks chosen by the player during character development. Combine that with 96 separate attack animations and you end up with a deadly flurry of silver, steel and magic."

"Geralt will have new parry moves, counters and dodges at his disposal. Combat itself has been slightly slowed down, and in turn has become more tactical. Defense will play a crucial role during fights. You'll now be able to block incoming attacks while moving - swing your sword, though, and you'll create an opening for your opponent."

Thinking!? Mods will take care of that.