Respawn: You have to "break people in a bit" with Titanfall's verticality 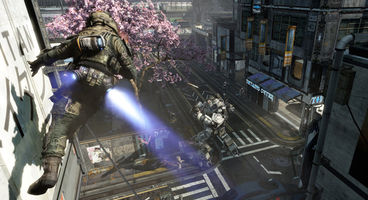 Community manager Abbie Heppe from Respawn Entertainment admits it takes people a little bit to get used to Titanfall's way of doing things. Why hide behind walls when you could be running up buildings?

Right now they're studying how best to communicate Titanfall's differences, but the best way to learn is to let them 'do it themselves' for the message to sink it.

We need to crane our necks up a lot more as Respawn don't want us just throwing waves of each other in cramped corridors, but scrambling buildings and riding Titans.

"I've been working on the game, I know what this icon is, I know why this is happening - but does the average person who picks up the game understand that this means this? Stuff like when there's somebody on the back of the Titan, what you can do about it," Abbie Heppe told OXM at a hands-on event.

"I still watch everybody come in and play it like they're playing a less vertical shooter," she continued. "They come in, they hide behind cover, they pop out and shoot a dude, they run for the next cover. When we play we're immediately on the walls and roofs, running around like crazy."

"You have to break people in a bit," she admitted. "And then I see them jump into a wall and they're like 'oh, I just ran along it' - and by the end of the match they're going crazy and playing more like how I would play."

"Even if you tell them, 'No no no, you should do this', it takes them doing it themselves to realise that - 'oh, you really can! Even after seeing the trailers and the gameplay videos we've released, you'd think they'd know, but it's about breaking people out of how they've always been playing."

Titans make all the difference on Titanfall's maps, and can actively punish 'Call of Duty thinking'. "I see people walk down the corridors. And it's like: 'You're going to get run over by a Titan. I mean, he's going to stomp on you if you keep doing that.' So you want to get in the paths, in the buildings, on the routes the designers have left for you."