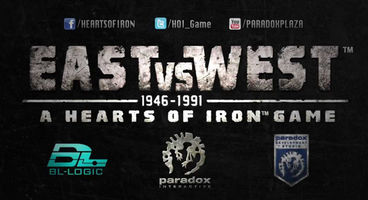 Paradox Interactive have made a decision as publisher of BL Logic's East vs West project to cancel the game. It had already been "severely delayed" and an open beta / early access still wouldn't have met "certain criteria".

The actual decision to cancel is 'fresh' and the community has been told "pretty much immediately." As it uses the Clausewitz engine they can't release source code to the community.

"Today it's our sad duty to inform you that it has been decided to cancel the game "East vs West". We at Paradox have the utmost respect for BL Logic and this is not a decision that has been taken lightly—quite the contrary—but ultimately we are a publisher and our actions and decisions must reflect that," posted Paradox Interactive.

"As the project has been severly delayed we dont think that open beta / early acccess could, within our desired timeline, meet the set criteria," they continued. "It has been a journey of ups and downs since we started the development of East Vs West back in May 2011. We wish each other nothing but the best with future endeavors."

"We also would like to thank the developers for their hard work and their tremendous effort, as well as the fans for their long term commitment and their never ending support."

The statement was signed off by Fredrik Wester, Lennart Berg and Gellert Keresztes.

They have since posted an FAQ and regard comments that East vs West suffered cancellation because of the Hearts of Iron IV project ongoing as "just plain silly." East vs West has been in development since May 2011, and it was announced late 2012.

- Why did you not tell us about the cancellation sooner?

: We really struggled to the last to make this game happen. Sadly it reached a point where it was no longer possible. This decision is fresh, and you were told pretty much immediately.

- Why not release what you got as an open beta as said before?

: So what is said in the initial post - As the project has been severly delayed we dont think that open beta / early acccess could, within our desired timeline, meet the set criteria.

- Why not release the game to be finished by the community?