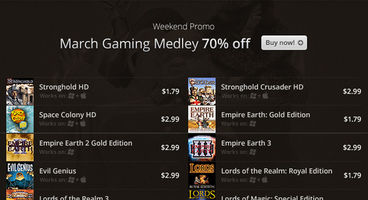 The March Gaming Medley will run from now until Tuesday, March 11th at 04:59 am GMT. All the titles in the weekend promo at knocked down 70% in price.

"There's an old Polish proverb comparing March to a cooking pot full of boiling brew. You never know what's inside exactly and what comes up when. It relates--of course--to Central European unstable weather in the early spring, but why shouldn't we apply the same to our weekend promo? Let's mix stuff up a little with our March Gaming Medley."

The current selection has another 3 hours remaining, as of press time. Check out GOG.com for more of these delights.