Alien: Isolation "very much" single player, "got to have those breaks" from fear 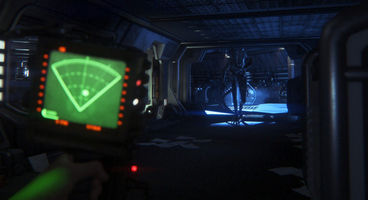 Creative Assembly is developing Alien: Isolation and they us in a room with a big bad xeno with no guns, maybe a wrench, and a whole lot of panic. It's not enough to just 'pile-drive' us into the ground in fear though.

The team recognise for that true survival horror experience we need to catch a break now and then, and they soon saw testers give a "sigh of relief when they got to the airlock."

Creative Lead Al Hope and Lead UI Art & Design Jon McKellan were both interviewed by RPS on Alien: Isolation, which goes back to the vibes of the original Alien film.

They didn't want to fall into the modern trappings of some many survival games were action was becoming this big overriding presence. A horde of zombies running at you soon becomes just a stampede of enemy soldiers, and lose their edge in spooking you, but Pit you against a singular and seemingly unstoppable foe that loves vents...

"The world itself is very dangerous and it’s physically dangerous, the world is kind of a puzzle in some respects. There is a small group of inhabitants on that station and they’re in a similar situation to you and how they react to you varies – sometimes positive, sometimes negative," revealed Hope. "There’s a large number of combinations of things that the player needs to be thinking about all the time to survive and it’s very much about surviving."

Hope and McKellan see similarities in how the world of BioShock is presented, where things have gone terribly wrong and there are still people lurking about amid the danger. Except Alien: Isolation has you arrive during the troubles, not afterward. "You’ve turned up right in the middle of it so everything has gone a bit chaotic that way," said McKellan.

Despite building the game the team are sometimes victims of their own scares in Isolation, which they attribute to striking the right king of atmosphere. Hope added: "So we know everything there is to know about creating this creature but he’ll still catch us out, he’ll still make us tense, he’ll still get our hearts racing when we’re playing it because it’s unpredictable and we don’t know what he’s going to do. He gets the jump on us."

"...he does navigate the world using the same space that you can walk around. But he’s also able to go up into the ceiling. I think the earlier pings you heard on your motion tracker was him up above you. So he’s able to get around very, very rapidly. You’re never one hundred percent safe."

"The thing is we’ve built such a complex AI, a very intelligent-looking creature, when it does think and does use its senses, it can still surprise you. It still surprises us so we know we’re doing something right when that happens… I think the dynamic nature of it – that it is different each time you play – that it feels like there is something that keeps you scared, keeps you tense," McKellan continued.

Creative Assembly aren't going to be pursuing any multiplayer for Isolation as it simply doesn't fit.

"No. It’s very much about a single player experience. We did think about it, it’s not like we never considered it – and we had some pretty neat ideas around that. But for us the focus always was that single player experience. And I think because you have this dynamic alien and it’s about the player’s choices while they play it, it does mean that you can go back and try different stuff out. So I think there is a lot of scope to have players go back and do things differently," said Hope.

"I think that as soon as you up the amount of humans then you’re no longer as ‘outnumbered’. You know, if you had two or three humans facing up against one alien it’s a completely different experience where you’re working together to overcome it rather than just trying to survive. It just felt better to leave it single player," chipped in McKellan.

Check out the full interview between Al Hope, Jon McKellan and RPS for more on Alien: Isolation.