Supernatural threats lurk in Betrayer and we'll have to contend with them as we try to figure out what happened. It's about first-person exploration with "minimal hand-holding."

You may remember Betrayer when it surfaced those many moons ago. They use black and white with dashes of deep red for the game world's eerie atmosphere. Spooky!

Betrayer has been available for some time through Steam Early Access, but it officially launches March 24th as Blackpowder Games wraps up development after tester feedback. 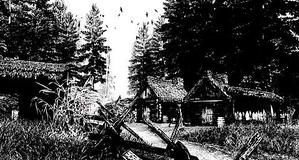