World of Tanks enjoys higher average revenue per user at $4.51 among F2P MMOs 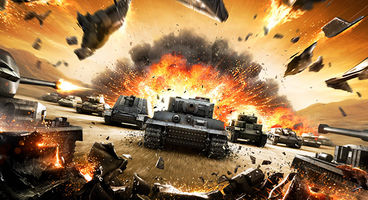 According to a report from SuperData Research, Wargaming's F2P MMO World of Tanks is leading the pack for average revenue per user among the free-to-play MMO big boys with $4.51. Valve is second.

The research group note that Western publishers tend to "try and maximize the value per user," while Asian studios do as well but operate in a vastly different market.

"DotA2 and League of Legends, arguably the two most visible titles in the MOBA genre, are close in terms of average revenue per user. But it’s important to keep in mind that for every DotA2 player there are nine people playing League of Legends. Because it’s slightly less accessible, DotA2 has more ‘core’ gamers as its audience, which translates into 20% higher spending per user," reports SuperData.

The tug-of-war is between quantity and quality, where SmileGate's Crossfire earns a lower average per user at $1.58 and so relies more on a large community and in fact earned over a billion in revenue last year with over 50 million active players. World of Tanks enjoys around 9 million active players per month with $4.51 spent on average. 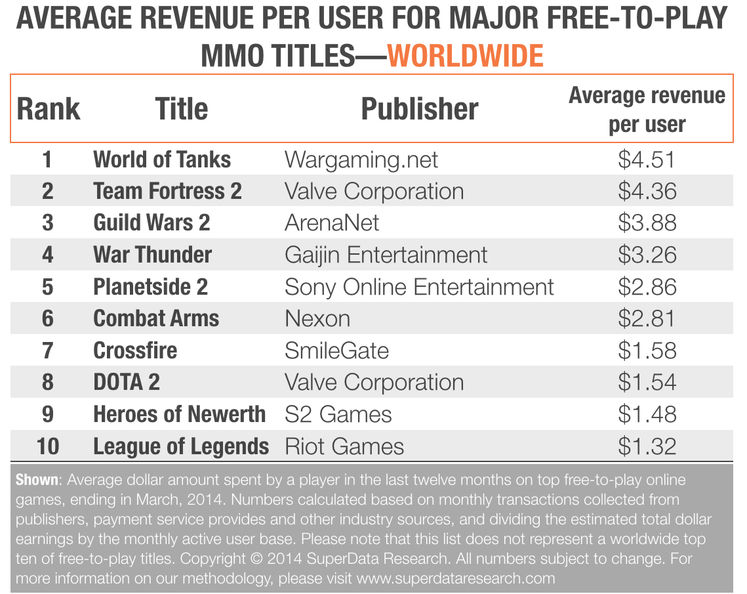 "Despite the recent trend toward so-called MOBAs, we see a distinct difference in earnings per player within even a single company. Take Valve. Despite being on the same digital platform (Steam) and likely relying on the same in-house experience with regards to sales tactics, Team Fortress 2 earns almost three times more per player than DotA2."

"One explanation is the growing trend toward user-generated content: letting players share in the riches stimulates both the production of and demand for in-game items," they continued.

They argue that creating a rewarding experience for users will see rewards returned in kind. No nickel-and-dime tactics.