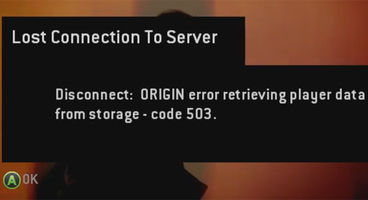 UPDATE: "Our team has resolved the PC connectivity issues and you should now be able to connect to matchmaking servers," tweeted Respawn Entertainment. Titanfall should now be playable.

Deja-vu? Respawn Entertainment's Titanfall is titanically failing right now as a connection error through EA's Origin service is keeping the online shooter from playing. PC gamers are besieged by 'Error 503'.

They acknowledge it's "experiencing connection problems," which may prevent the game starting or could drop you from a match. Respawn are working on the issue.

Titanfall requires the Internet to function and so it can't launch. "Titanfall is currently experiencing connection problems, which means you may not be able to connect to online play, or even might get dropped from an online match you're currently playing," read a statement on EA's help page.

"Rest assured that we're addressing this problem and will provide updates as soon as possible. Thank you for your patience. Please stay tuned to this article for more information." Imitation is the sincerest form of flattery, they say, but this comes a little too close to Battlefield 4's blundering start.

Even Xbox Live experienced trouble as Titanfall went live in North America on Xbox One. "Looks like Xbox live sign in is down currently," Respawn's Vince Zampella tweeted. "I hope that isn't our fault!" Microsoft addressed the cause and it wasn't apparently linked to Titanfall's launch, which is something at least.

Titanfall releases on PC and Xbox One this week. Hopefully by the time it reaches European shores the Origin connection error will have been fixed, as otherwise you've got 48GB of nothing. Already a sizeable day one patch was released that downloaded as part of the pre-load of Titanfall.