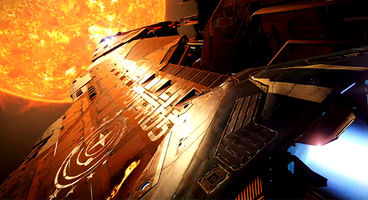 Frontier Developments is flush with space cash today thanks to Elite: Dangerous causing a dangerous amount of keyboards to short-circuit from saliva overload.

However the original budget for the space sim was Â£8 million, which was Frontiers own pocket money, but then an extra Â£1.58m came from Kickstarter backers. There's enough to finish it.

With beta access going for Â£50 apiece, which includes the full game, Frontier is more than comfortable to dock Elite: Dangerous into our space sim hearts.

"The original budget, because we put a lot of our money towards it, was Â£8m," David Braben told Eurogamer. "We're a public company so we can't put out figures without first putting them to the City, but let's just say we're very, very happy." Friendly rival Star Citizen from Chris Robert's studio Cloud Imperium Games enjoys over Â£30m from backers.

Over 75,000 had been playing Elite: Dangerous by the middle of August, which is a great number considering the high asking price to beta test, and it's giving the studio "more and more money that moves ever closer to the game breaking even in a really good way".

"Oh we already have enough to see it through," Braben added. "It all means it just de-risks it in a really good way."

Braben admits it’s a bit empty right now. "I liken it to building a house," he remarked. "We built the foundations, we built the walls, we plastered it, we put the roof on. We're now putting the furniture in, but it's an empty house." Elite: Dangerous remains 'on track' for a late-2014 full release.

Frontier has been pondering a console version for Elite, which they've got experience with. What definitely won't be making it on console or even PC though is The Outsider. Remember that? It was Frontier Developments exciting open world action thriller set in Washington D.C. against a corrupt regime. Where do they get their ideas? Sadly it's 'likely dead forever'.