Braben: "True successors" to Elite and Frontier was Grand Theft Auto for freedom 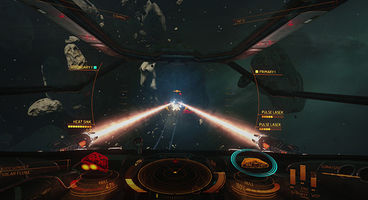 Elite: Dangerous creator David Braben has said the space game became so niche because it "lost sight" of player freedom, which is something Grand Theft Auto took and ran with ever since, he argues.

Elite is all about "individual choice in an open world" - just doing what you want to do at any time. A game' setting "is secondary to the feeling of freedom," continued Braben.

Frontier and David Braben are finally working on Elite: Dangerous thanks to technology catching up to ambition, a sentiment echoed by 'friendly rival' Chris Roberts.

"I think games set in space became quite niche. They lost sight of what was the key element of Elite and Frontier - freedom. The true successors to Elite and Frontier were the Grand Theft Auto games. For me, the setting is secondary to the feeling of freedom," Braben told TechRadar in an interview on Elite: Dangerous.

"The success of the Elite series has always been based on the freedom that players are given. It's all about individual choice in an open world - you don't select "pirate" or "bounty hunter" or "trader" from a list, you simply do what you want and events will unfold accordingly."

"Traditional publishers have always regimented games into strict categories for forecasting and planning reasons, and somehow "space" became a category in itself - including games like Dead Space, Mass Effect and Halo, which are all quite different." A competitor to Elite: Dangerous is Chris Roberts' Star Citizen - equally focusing on freedom.

They're friendly rivals, he assures. "I'd place the emphasis on "friendly" as we are both alpha backers of each other's games, and both want the other to succeed. The games we are making are very different - Star Citizen is a handcrafted story-based game - but there are common elements, the most obvious being that they are both set in space."

"Many of you will have seen the discussion Chris and I had during the Elite Kickstarter campaign, where we discussed the return of the space game at length with Gary Whitta. If you haven't seen it, you can still check it out through our website or the Elite: Dangerous Kickstarter site. It's also not just Elite: Dangerous and Star Citizen, there are others, too. I think shows there is strong interest in this area, which is a very good thing."

Elite: Dangerous is now in alpha with backers able to start playing and test new features coming online. Star Citizen is soon to release its long-awaited Dogfighting Module. Check out the full interview between David Braben and TechRadar.