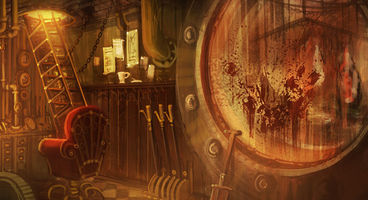 The vitriol didn't come from what was happening story wise, but how the mechanics of the game worked itself, which surprised the indie British studio the most.

"I thought what we sort of had a screenshots going out, of a pig nailed to a cross, that we were likely to get a couple of phone calls but amazingly people just went yeah, whatever," Dan Pinchbeck told GamesIndustry.biz. "We got some really... the worst kind of hate mail we've ever got as a studio, some really very, very nasty stuff."

It was complaints about not having the freedom to fling every object about or the sanity meter missing, which featured in the first Amnesia title. The mistake was to perhaps link it with the Amnesia name at all.

"The stuff I found most difficult was the idea that people wouldn't even kind of engage with the ideas or the content of the game because they seem so incensed by the way in which it was packaged. In terms of going, "I just don't like the way in which this... this kind of game play is structured on quite a mechanical level." And that's kind of... I still, I struggle a little bit with that in terms of understanding it," said Pinchbeck.

He also believes Resident Evil "just became toothless so fast, I mean Resident Evil was always cheesy, it was never kind of scary in terms of its story but I think stuff like Dead Space kind of like it, it started to veer away whenever we get too close to making you slightly uncomfortable. You could almost feel it desperately backpedalling away from it."

Pinchbeck argues that indies are more 'free' to explore the real dark avenues of horror - a "cheap trashy paperback."