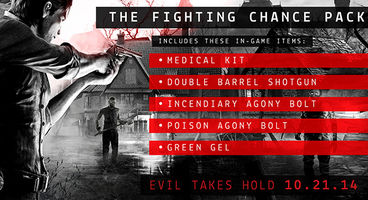 Bethesda has announced that Shinji Makami's The Evil Within, being developed by his new Tango Gameworks studio, will be scaring us something awful this Halloween on October 21st. Pre-order bonus on offer.

A special trailer has been released where see genuine reactions of playtesters, which gave Bethesda "plenty of entertainment value." It releases days later in Europe.

Naturally Australia and Europe are subjected to a few days delay, but that just means we'll hear the screams from the US first, giving us the chance to man up our shrieks.

The Fighting Chance Pack is available with pre-orders:

▪ Medical Kit – A vital health enhancement to enable Sebastian to fight on.

▪ An Incendiary Agony Bolt – Capable of showering nearby enemies with damaging fire sparks.

▪ A Poison Agony Bolt – Will draw enemies towards it and poison them, allowing Sebastian time for a quick escape.