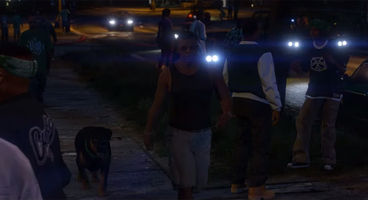 Heists for GTA Online maybe the big thing current Grand Theft Auto 5 players are wanting - that, and some single-player DLC - but what of us poor PC gamers?

Troubling news from Gamescom suggests that Rockstar will be keeping GTA 5 a while longer, missing the supposed late 2014 release. Apparently it was at Gamescom, but only for retailers.

The last big mention of the next-gen GTA 5 was at E3 in July at Sony's press event, but it's been suspiciously absent from the lips of Sony and Microsoft.

Retailers were apparently treated to the next-gen versions at the convention in Germany, but journalists weren't invited. A 'Fall 2014' release as promised by the initial announcement trailer seems less and less likely. So far only the PlayStation 4 version of GTA 5 has been teased by Rockstar, with PC missing from the festivities.

It's now the end of August and we've not heard a peep more about Grand Theft Auto 5 for PC or next-gen.