28 February 2014 | By Simon Priest
The sci-fi dungeon crawler from California-based Juggernaut Games has just managed its $65k Kickstarter goal, and it has just under a fortnight left. StarCrawlers is all about freelancer mercs exploring the fringes.

It has a strategic RPG style with a time unit action system and full class ability customisation. Loot is randomised as much as the missions and environments themselves.

The Juggernaut team has released a combat walkthrough video for StarCrawlers, which is all real-time action directly from the game and as such is all pre-alpha footage including "all abilities, items, numbers, etc". Now that the main campaign for StarCrawlers has been achieved the community can hopefully start to chip away at stretch goals.

Should everyone go crazy for a sci-fi dungeon crawler with a very enticing visual style then at $225k Juggernaut will include customisable player ships, but there's plenty on the stretch goal menu before that including up to four new player classes that would be voted on. Localization is also offered along with mini-boss encounters and item crafting.

Check out the StarCrawlers Kickstarter campaign for more. 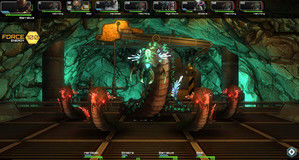