29 January 2014 | By Simon Priest
A new fancy bit of pre-rendered cinema is available for The Elder Scrolls Online, and pre-orders can now begin for the physical Imperial Edition for the MMO. Finally our very own Mudcrab.

Daedric Prince of domination and enslavement, Molag Bal, is also in 12" statue form. There's a 21" x 26" map of Tamriel, a 224-page guide to Tamriel, and exclusive digital treats.

No horse armour... but we do get a horse; the White Imperial Horse. A Mudcrab vanity pet awaits our adventures and the Rings of Mara, which give a boost to XP when in a group.

▪ Steelbook™ Packaging. A limited edition steel case decorated in the color of the Imperials.

Play as an Imperial: Become an Imperial and play in any Alliance. Gain unique bonuses, crafting styles, gear, and more.

White Imperial Horse: Summon this Imperial mount and journey through Tamriel with speed.

Mudcrab Vanity Pet: Explore Tamriel with a mudcrab pet scuttling along by your side.

Rings of Mara: Complete the Ritual of Mara with a friend and receive an experience bonus when you play together. 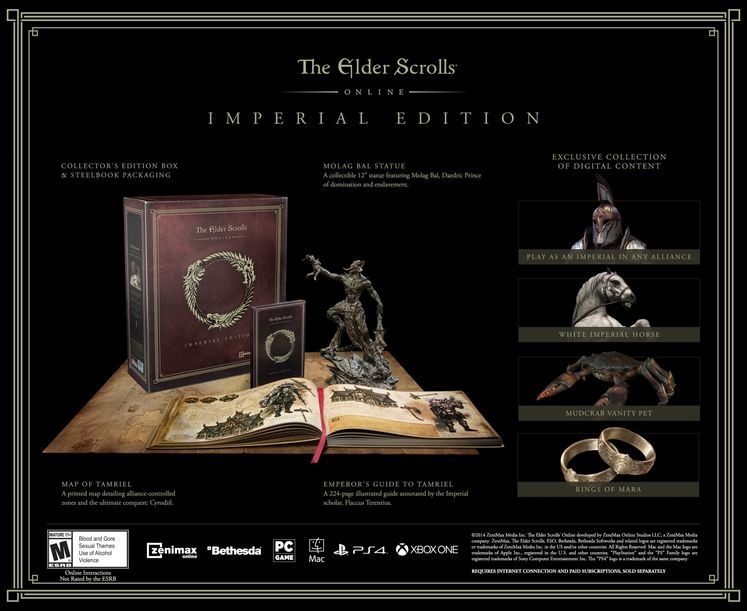 An Online Digital Imperial Edition is priced at $79.99 / €79.99 / £69.99, which has everything except the physical goods. Any who pre-order The Elder Scrolls Online regardless of edition gets The Explorer's Pack bonus at launch, which gives a vanity pet, four treasure maps and any of the nine races to play.

There are Early Access bonuses for pre-ordering on PC and Mac with five days early access available to those who pre-order through The Elder Scrolls Online Store, or participating retailers.

The Elder Scrolls Online releases on PC and Mac April 4th, on Xbox One and PS4 in June.