Codemasters reveals system requirements for F1 2015, ahead of July 10 launch

08 July 2015 | By Nick Horth
Codemasters has released the system requirements for F1 2015, ahead of its release on July 10. This year's entry is actually designed with next-gen consoles and modern PCs in mind, so it should be a bit of a visual upgrade from last year's disappointing effort.

This time around there's quite a gap between the minimum and recommended specs, so presumably the game will scale down quite nicely for those without monster systems, while still looking sharp on high-end setups. Here's the specs:

As well as the upgraded graphics, F1 2015 also features improved presentation, updated rosters, and Championship Season mode, which looks to bring some much-needed authenticity back to the series. 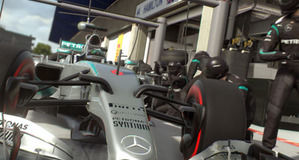