13 April 2015 | By SimonPriest
Naval fleets in Hearts of Iron IV are getting an overhaul and will now, it seems, act more like the air forces which operate in specific strategic areas. Fleets can still move from province to province, says the developer diary.

"Just like the strategic air war navies spend most of their time on missions in strategic areas, but are also able to move province by province. When in a strategic area each fleet has a value indicating how spread out it is. In general a more spread out fleet can cover more area and have a higher chance of finding the enemy, but will take time to concentrate its forces and bring them all to bear," explains the latest developer diary from Paradox Development Studio.

"Things like how fast fleets of a certain composition can converge and how well they can search in an area is controlled in large part from Naval Doctrines. We'll cover those in detail in a future diary, but as an example if you pick the Trade Interdiction doctrine you can unlock Wolfpack tactics which will make sure your subs find more targets and can all get together and strike more often." A single screenshot is also posted, revealing the new look to naval fleets. 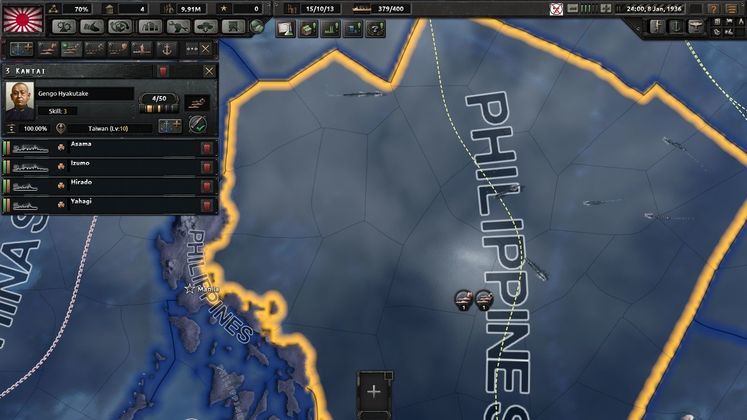 ▪ Search & Destroy - Much like Patrol but less efficient at searching while keeping the fleet together more. Suitable for trying to force large fleet vs fleet battles, say like the Battle of Midway.

▪ Convoy Escort - Protect any convoys in an area from raiders.

▪ Hold - Not really a mission, but can be useful for ships like Carriers that you want to just position like a floating airfield.

"When fleets find each other or convoys of the enemy naval combats will trigger. Depending on how spread out the fleet is, doctrines and luck its going to be a smaller part of the fleet that makes initial contact. Naval battles in HOI4 can simulate longer affairs where ships join over time as the rest of the fleet rushes to help," continued the developer.

It's certainly a more realistic approach to naval warfare, and will hopefully prove a lot more interesting in Hearts of Iron IV when it releases. The team is also looking at submarines so they have a greater impact on supply lines.

"In HOI3 it never really felt like submarine warfare had enough impact and we want to fix that in HOI4 and force nations to have to spend resources to counter it. The way the strategic area mission system works also allow you to use surface raiders, like how Germany historically used its few heavy cruisers to tie up and frighten the British navy."

"Convoys are extremely important and transport both replacement equipment to oversea battlefields, supplies and resources so hurting them will have a large effect, sunk convoys can't be instantly replaced either so active defense is necessary, you cant just try to outproduce the enemy's sinking. Lend lease of equipment and tanks to allies also use convoys and this material can all be lost to the bottom of the ocean when faced with an efficient submarine net."

Check out the latest developer diary for more on Hearts of Iron IV's naval gameplay.