16 February 2015 | By SimonPriest
The Game of Thrones universe is nothing new to the Paradox Interactive teams, especially as Crusader Kings II is often cited as 'being like Game of Thrones' with its RPG-based family drama, but would they ever go for the IP?

Paradox CEO Fred Wester said Game of Thrones would definitely be high of the list, but he's "still on the fence" about whether it would be good for Paradox or not. HBO has spoken with them about it.

It's not entirely what you might think though, as HBO weren't nudging Paradox to suddenly take on the franchise as a grand strategy. Instead the now infamous Crusader Kings II mod had caught their attention, and they wanted to make sure it wasn't being monetised by the studio. 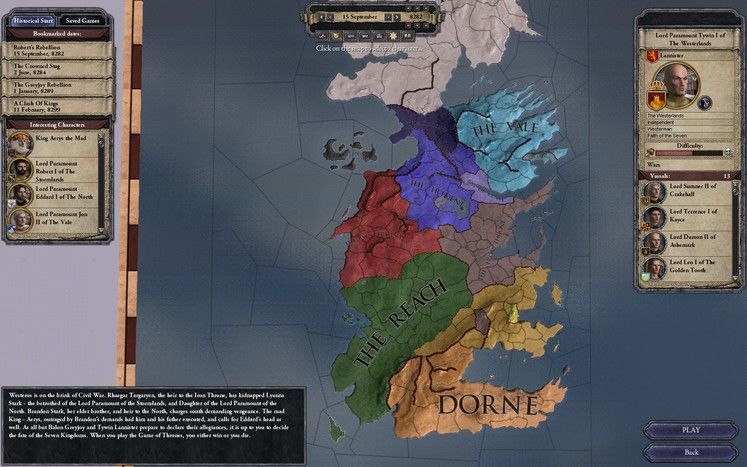 Crusader Kings 2 - A Game of Thrones

"The reason we haven't approached HBO," Wester said at ParadoxCon, "is that I'm still on the fence because I'm not sure it's the right route for us to take."

"We are in contact with HBO on other things, like, we can call it 'The Game of Thrones mod,'" he continued. "They're not shutting it down. They're just a bit... wary about us monetising it, or if we're marketing it. It was after the Kotaku article," he said.

"The mod is great, though," Wester went on. "It would make a great franchise for us, it's just that we just need to get over that inner feeling that it's not the right thing to do."

Should Paradox stick to alternate history making, or maybe stretch to something more fantastical? Paradox Development Studio is currently working on Hearts of Iron IV, an expansion to Europa Universalis IV, likely something extra for Crusader Kings II, but also has two others on the go.