Original Fallout gets a shout-out in Diablo 3 2.4 patch

Diablo III is beta-testing its massive 2.4 patch, which was detailed ten days ago, and some of the testers found a little shout-out to the Fallout series, apropos as Fallout 4 was just released to PC and consoles.

The reference comes courtesy of a new Legendary socket gem, called "Boyarsky's Chip." Leonard Boyarsky worked on Fallout 1 through 3, from art director to designer, and was one of the designers of the G.E.C.K. (Garden of Eden Creation Kit), and worked on Diablo III itself. The chip is a reference to the Water Chip that was the MacGuffin of the first game. 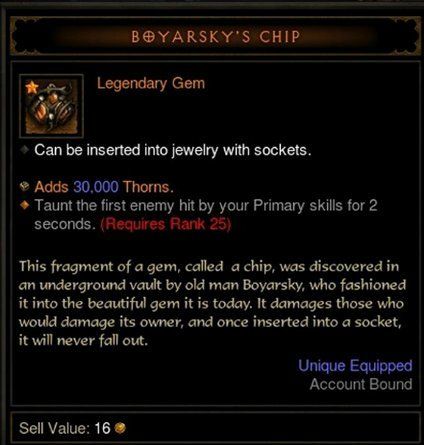 To solidify the reference, the item description states: “This fragment of a gem, called a chip, was discovered in an underground vault by old man Boyarsky, who fashioned it into the beautiful gem it is today. It damages those who would damage its owner, once inserted into a socket, it will never fall out.”

The 2.4 patch is still in beta-testing, with no set launch date as of yet.