21 January 2015 | By SimonPriest
If you missed the pre-order incentives for Assassin's Creed: Unity then you can now get a hold of those extra little side-missions and gear items... for a price. Yes, Ubisoft is actually charging us for it.

That's not surprising as this is their standard operating procedure, except Unity is far from their standard launch of a new Assassin's Creed. PC in particular still feels the brunt of lacklustre quality control.

Got yourself a fancy SLI configuration in that sweet rig of yours? The latest patch for Assassin's Creed: Unity broke the game for SLI'd GPUs, causing water to flicker like mad (unless it rains apparently) and you get no performance boost either. 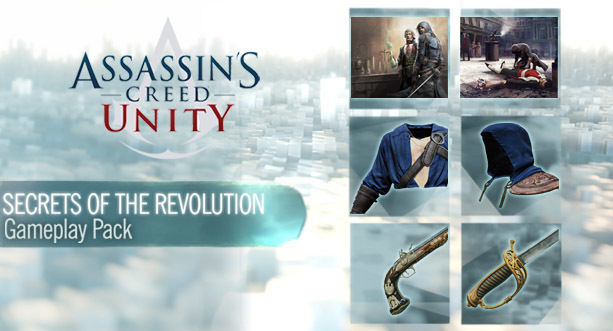 The Secrets of the Revolution DLC is also priced quite outrageously given all that's happened at a wallet-gouging £5.49 for PC, through the Uplay shop.

What does the bundle include? 'The Chemical Revolution', 'The American Prisoner', and 'Killed by Science' side-missions, 8 weapons and 6 pieces of gear. All this content is already part of the game but walled off arbitrarily don't forget, and they want over £5 for the privilege of no longer holding it hostage.

Yes, this is Ubisoft in the games industry today having released Assassin's Creed: Unity about a year too early. If you bought the now scrapped and 'compensated' Season Pass, this pre-order bundle is yours freely. How generous.