Does Unity heroically storm the barricades or find its head in a wicker basket?

Following the Notre-Dame Fire, Ubisoft is giving away Assassin's Creed Unity on PC and donating to the cathedral's reconstruction efforts.

Assassin's Creed Unity was derided for its instability and shoddy development at its launch, and the game's Senior Producer François Pelland promises that Assassin's Creed Syndicate won't have the same issues. 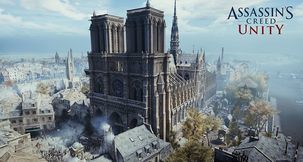