Does Unity heroically storm the barricades or find its head in a wicker basket?

Assassin’s Creed: Unity was supposed to be a new milestone in video game technology, the first game to take advantage of the power of next generation consoles. For PC gamers, it was meant to be the mainstream title that freed them from the shackles of limiting ports, and allowed them to really put their painstakingly assembled gaming setups through their paces. Instead, performance-wise Unity is a janky, ragged mess that only occasionally shows glimpses of its full potential. When the game’s not stuttering to a halt it’s an enjoyable enough Assassin’s Creed adventure, though it’s one that lacks the ambition to really breathe new life into the franchise.

Let’s start on a positive note. The game’s recreation of revolutionary Paris is the most beautiful, believable city environment I’ve ever seen in a video game. Clamber to the top of Notre Dame as the sun rises and you can’t help but admire the beauty of the lighting engine as the pale orange light dawns across a painstaking recreation of Parisian architecture, from the back-alley grime of the proles’ quarter to the ludicrous opulence of Versailles and the noble districts. It’s breathtaking. 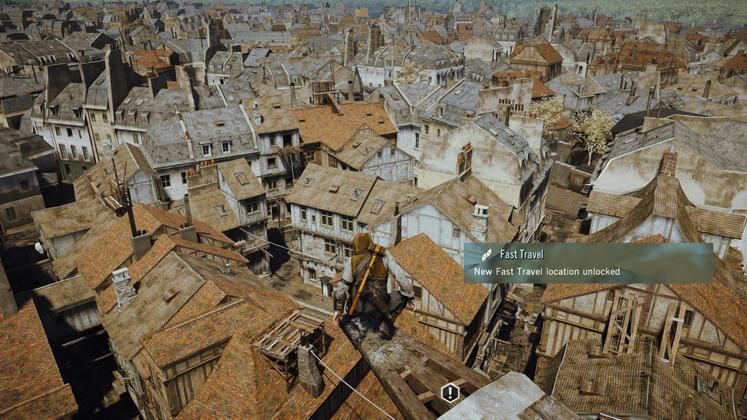 Revolution-era Paris is recreated beautifully. It's such a shame the game's stability buckles so frequently when you hit the streets

Until you look too closely. Then you begin to notice them; a levitating civilian there, a moon-walking royalist here, a man’s trousers sticking out a hedge for no particular reason that I can fathom. A few hours into the game, and Paris is no longer a beautifully realised location, but an endless exhibition of bugs and glitches. Most are annoying or amusing rather than game-breaking, but added together they’re concrete proof that Unity simply wasn’t ready to be released.

It’s a shame, because there are some great ideas here. The new movement controls add up and down buttons for parkour, which finally does away, for the most part anyway, with the old Assassin’s Creed problem of accidentally hurling yourself off a roof when you’re trying to shimmy down to the street. There’s some neat animation work as Arno skips for beam to window ledge to market stall, and it makes evading enemies far more smooth and satisfying. Issues still arise – I had more trouble entering a house through the window than I did with the majority of Unity’s boss battles – but generally I think the basic movement here is the best the series has ever achieved.

Oh, and there’s finally a stealth button. Being able to crouch and therefore not instantly get spotted is so overdue for this franchise that I shed a few tears of pure joy when I first used it. Stealth in Unity is still a bit of a hit and miss affair for an assassination game, with far too little opportunity to predict and react to enemy soldiers’ movements, but that simple button removes a lot of the frustration from instant-fail sneaking missions.

Much of the complexities that the franchise had piled onto its counter-heavy fighting system by the time Black Flag was released have been removed. You’ve now got two basic moves, a parry and a strike. Counters will no longer set up enemies for an instant kill, and enemies are far more aggressive, which means you can no longer stand stock still in the middle of a horde of soldiers, neatly stabbing each one who attacks you in the throat. Animation hiccups drag the simple fun down again, though. I lost count of the times Arno stabbed an enemy despite pointing in a completely different direction, or a guard somersaulted awkwardly into the air upon his death. 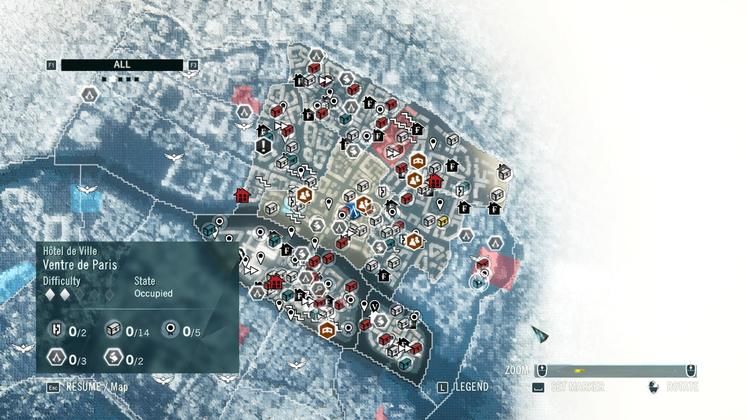 What? Where am I meant to start? Looking at this map fills me with existential dread

Story-wise Unity seems like an attempt on Ubisoft’s part to draw a line under the increasingly baffling franchise storyline. Though Unity does nod to the ‘colonial era’ of Assassin’s Creed, this is very much a standalone tale. The modern meta-narrative has been peeled away, leaving the barest framework to set up the story and omitting any modern-day parkour shenanigans or Black Flag-style office work slash spying. I’ve personally always found the modern day aspects of the series deeply distracting, and I think sticking to one story helps the narrative flow a great deal.

This is one of the series’ better tales. Arno is a likeable protagonist, and though his arc from roustabout noble to agile killer is maybe a little quick and easy, he’s got more motivation than Edward Kenway and more charm (roughly a million times the charm) than AC3’s Connor. He’s Ezio mark two, essentially, and he’s enjoyable company. The story zips along nicely, and although it never reaches beyond Dan Brown-style conspiracy theory nonsense, it entertained me well enough. Though at some point someone needs to point out to the Assassins and Templars that they’re boring, humourless sods. Wouldn’t it be cool to play a Creed game where you work for neither of these self-absorbed institutions?

Outside campaign missions there’s plenty to do, but it’s definitely a case of quantity over quality. Paris is swamped, absolutely plastered in side-missions and collectibles, but for the most part they’re simple collection or assassination jobs. The new ideas, like several murder mystery events dotted around, are a passable distraction, but there’s nothing here that comes anywhere near to the rollicking naval fun of Black Flag.

Unity also loves to fill up the screen with an obnoxious amount of clutter and pointless complexity. There’s four (four!) different kinds of currency, and the same number of types of chests, each of which need to have their own specific goals met before you can open them. It’s odd to see Unity be so awkward and ungainly when you look at the fantastic exploration and rewards available in Ubisoft’s other big open world game this year, Far Cry 4. 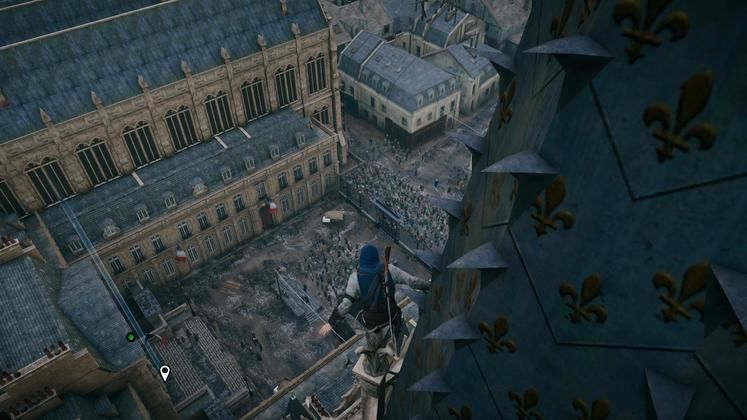 Unity can be absolutely stunning. I think I spent more time gawping slack-jawed from the top of churches than battling the Templars

Completing these side-missions earns you cash, weapons, or costume parts for your own personal Arno, who can then hop into a friend’s game In co-op play. So far my experience with the multiplayer has been marred by connection issues and glitches, but when it works it’s decent fun. It feels like an afterthought rather than a main feature, though. Assassination missions aren’t particularly interesting or challenging, and stealthy heists are just too frustrating to bother going through with a friend. Ubisoft is right to experiment with co-op multiplayer in the series, but it needs to be a main focus during development.

Basic performance is almost universally less than impressive, even on powerful machines. My home PC matches the recommended specifications, and I struggled to maintain a decent framerate whenever I hit the streets. I tried it again on a slightly less high-end setup, and it was essentially unplayable. It’s doubly frustrating when combined when the constant glitches, oddities and disappointing texture work. The game can look utterly beautiful, but for the most part that only happens when you stop playing it and stand there enjoying the view. Which gets boring rather quickly.

If you can put up with the stuttering performance and some comically ridiculous bugs (my favourite was an assassination target moon-walking backwards into my confused assassin’s cavalry sabre) then there’s a decent Assassin’s Creed experience to be found in Unity. The fact that it’s never more than decent makes those glaring technical issues much, much harder to excuse. Despite some good ideas and an entertaining tale, this isn’t a revolution for the franchise. Considering the hype and the promises made compared to the final experience, it actually feels like a step backwards.

Breathing in the wondrously recreated atmosphere of Notre Dame cathedral. Part of the reason the game is so disappointing is the obvious hard work and care that’s gone into recreating 18th century Paris.