27 January 2015 | By SimonPriest
Former Westwood Studios and EA man (give him a chance!) is now at war on all fronts as he leads an army of one in creating his new indie action-strategy game Army 21, which sounds a bit like Renegade.

Except it's turning up the heat a lot. It all starts with 6 teams, which whittles down to the remaining two. As teams get knocked out their players join the surviving teams. It's all about base warfare.

Up to 60 players are involved in these heavy tugs of war for supremacy. We'll be building and defending our bases as we wage war against 5 foes, before they get cut down. Of course while taking out a base is a victory, it just means everyone else gets stronger in numbers too.

"You're competing to win each match as the undefeated team; competing to increase your own difficulty level (there are 50 levels); competing to beat the best time and best points recorded for each level; and above all you're competing over the long term to achieve a high Army Rank and placement in the Worldwide Leaderboard," read the press release.

Tom Spencer-Smith is the indie war machine behind Army 21. The game has now entered into Alpha testing, and they need fresh recruits to put through the grinder. Check out the official website for more. A Kickstarter campaign to expand the game's scope is due later in 2015. 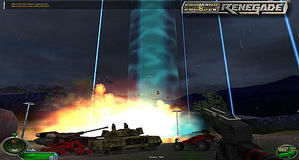