Grimoire: Manastorm is available to play for free this weekend

29 October 2015 | By TJ Denzer
Get your spell books ready. Grimoire: Manastorm is free to download and play right now and will be through the weekend. The game has been in Early Access for some time now and now players who want to get their hands dirty in some first-person magical combat can take the game for a ride without paying anything for a limited time.

Grimoire: Manastorm is first-person or third-person arena combat game sort of like Quake, but instead of guns, players jump into the role of a mage with numerous spells at their disposal. There's a hefty selection of offensive, defensive, and utility spells between distinct mage classes at your disposal for dispatching and defending against your enemies across seven fantasy medieval arenas.

While this deal is going on, the game is also 25% off its original price in both single buy or four-pack to share with your friends. You can find the game here. 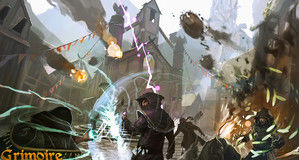