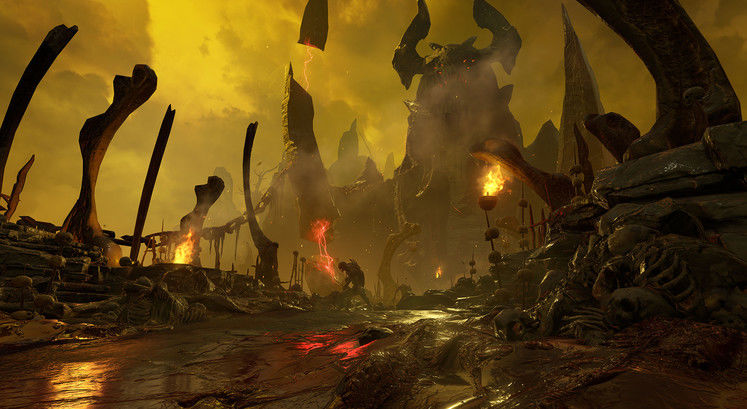 Bethesda and id have really started to enjoy their surprises, and they’re not making exceptions for QuakeCon. They used the stage to announce an early release for Doom’s first DLC pack, Unto the Evil, a full day earlier than scheduled.

Unto the Evil adds three new maps for Doom’s multiplayer--Offering, Cataclysm, and Ritual--as will as a new pistol weapon, a new piece of equipment in the form of the Kinetic Mine, and a new demon power-up called the Harvester. In addition, there’s a whole new set of cosmetic armor sets, colors, and taunts, as well as a new group of consumable hack modules.

If you haven't checked it out already, be sure to read our full Doom review!

There’s also a new system called PartyPlay, which will allow you to play on the DLC maps without purchasing them if you’re partied up with a friend who owns the content. In promotion of the release, the game’s offering a double XP weekend which will last until August 8.

Doom was widely praised when it was released this past May, but that praise was certainly more for its single-player campaign than its multiplayer content. I haven’t checked in to see how many player are stick with the online, but this should pull at least a few back in. The content is available now for £11.99/$14.99.