With the possible exception of Deus Ex: Mankind Divided the FPS Formally Known As Doom 4 is the game I was most looking forward to. The series runs very high in my affections because it introduced my Three Pillars of Great First-Person Shooter Gameplay – tight compelling level design, superb enemies to fight, and never letting the story get in the way of the gameplay. Even Doom 3 held to this, as does the Half-Life series, and certainly at least in terms of monster design Doom has the best around. So does New 2016 Not-4 Whoops I’m A Reboot Doom stand up to this legacy?

The first big shock comes in the first few seconds as Doom literally throws the player straight into the action. No preamble, no text, Dave The Unnamed Doom Marine wakes up on a slab and starts shooting zombies immediately. Even the original Doom has a longer gap between starting and shooting. There is a story about the Union Aerospace Corporation (basically the id Software version of Aliens’ Weyland-Yutani) trying to exploit Hell for energy, a plan which couldn’t possibly go wrong, and the efforts of a cyborg woman named Olivia Pierce to open the door to Hell permanently.

It’s happily kept quite subtle, with only a few story moments in-game and a lot of the backstory confined to collectable logs. It’s good to see that id Software realizes that people don’t come to Doom for high drama, epic storytelling and overlong cutscenes, they just want to shoot demons. Wolfenstein: The New Order got away with it, Doom wouldn’t have. Doom is just pure action and entertainment all the way through, but that does leave what story there is feeling like an afterthought, and there’s absolutely no connection to Doom 3.

For the first few levels I didn’t think the gunplay in Doom was that special. It was all quite simple fun – run, shoot, grab health and ammo, click ‘Melee Attack’ when an enemy glows to rip his arm off and beat him to death with it, predictable stuff. Then I found myself missing it when I wasn’t playing. Walks in the warm sunshine and fresh air became a desperate desire to get home and play Doom. Only truly special games do that to me and Doom is now among their number.

Just over 30 minutes from an early level of new Doom.

What seems at first to be deceptively simple arcade-y run-and-gunplay actually has a lot going for it, and the learning curve is so carefully implemented I nearly didn’t realize it was there at all. At the start with simple Imps and zombie soldiers there’s little threat and you can just leisurely stroll around and pick them off, but at the same time you’re learning the rules. As new monster types slowly get metered out – a Hell Knight here, a Mancubus there – the combat actually gets tactical. You have to start worrying about taking out certain enemies first, picking up health and ammo, dodging, using power-ups or your best weaponry effectively, you really have to think on your feet and it’s satisfying as Hell.

The action is made even better by the various systems pinning it. The brutal and much advertised Glory Kills at first seem unnecessary then quickly become both amusing (targeting a specific limb from varying angles creates wildly different takedowns) and hugely helpful since it nets you much-needed health and ammo in the middle of a firefight. Likewise the parkour aspect, which is basically just jumping and mantling, not only gives a real sense of verticality but allows a wonderful sense of free movement during combat… and certain enemies will even be able to counter that!

Importantly id Software (old and new) realize that it can’t just be wall-to-wall action, you have to have a breather between fights and there’s rather a surprising amount of exploration to do that in. Maps are regularly non-linear, with several different path options and a lot to find in-between. While the maps aren’t ever too big or too open and at heart it’s still a slightly evolved corridor shooter Doom knows what it’s doing and stays fun all the way. 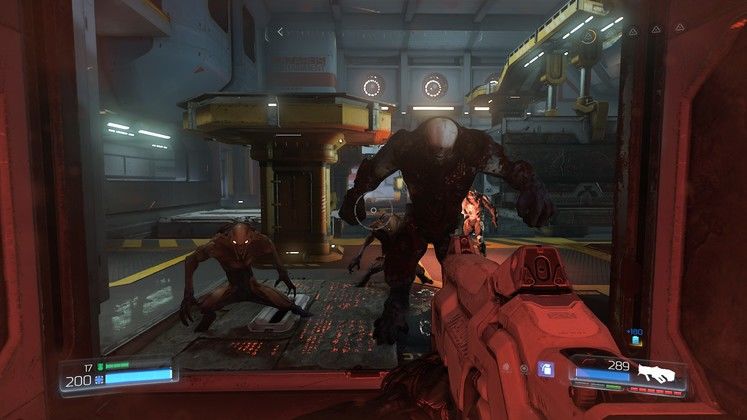 I’m going to be honest here, with the multiplayer I had more fun in the Beta than the final release and there were a lot of folks who didn’t even like that. There are six main modes comprising Team Deathmatch, Domination, Warpath (moving capture point), Soul Harvest (collect tokens from dead players), Freeze Tag (freeze enemies and thaw friends), and Clan Arena (eliminate the enemy team). This is topped off with two different combos of these modes.

For starters a lot of the fun of multiplayer was sapped out for me by the usual online problem: too many players being too good at it too fast. Two days after release and every match I played had several players already at Level 30 or over, which I’d have thought was mathematically impossible. The modes are amusing but very retro (meaning overused and not particularly inspired), only saved by the inclusion of Demon Runes that transform you into powerful versions of several demons like the Revenant or Baron of Hell that at least add a twist to the gameplay. Furthermore I regularly had trouble finding players to fill a public lobby, to the point that I’ve not actually played Clan Arena yet despite my best efforts. If it’s the greatest multiplayer mode ever I apologize. Freeze Tag is probably my favourite anyway just because it seemed to encourage team play a bit more.

There’s actually a secret seventh multiplayer mode: co-op. I say “secret” because it’s not in the main campaign or multiplayer sections of Doom, it’s only in the user-made SnapMap area. More on this in a moment, but if you got excited about the ‘Co-op’ tag on Doom’s Steam page just remember it’s only in user maps. In short though multiplayer is a cute diversion but I highly doubt you’ll be swallowed whole by it.

Support GameWatcher and order Doom from Games Republic where it’s priced 13% off at £29.74. 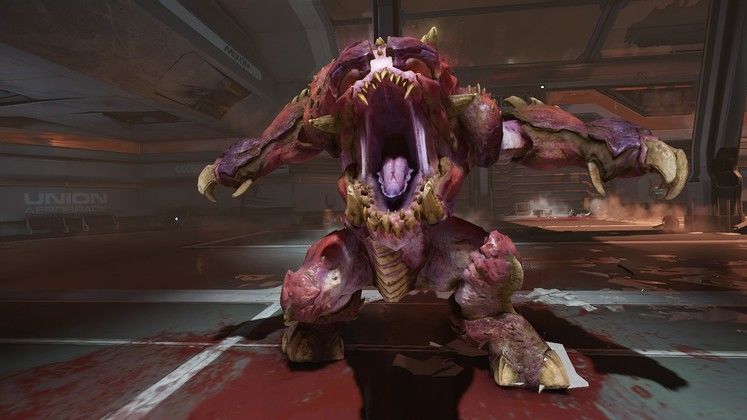 That’s probably all about right. Bear in mind that even if you ran the Beta perfectly you may run into issues as the campaign has significantly larger and more details levels than the multiplayer. I have a recently bought PC running an AMD-FX 6300 Six-Core Processor, 16 Gb RAM, Nvidia GTX 960 4Gb, and Windows 10, and I had no problems running Doom in near-maximum settings.

And it looked utterly gorgeous, albeit in an id Tech-kinda way. Meaning very pretty with wonderful textures and designs, but with totally static environments where crates don’t even smash. At least I never encountered the slow texture loading problem id Tech 5 games like Rage and Wolfenstein: The New Order suffered from, and for that alone I’m sure many people will be grateful. However many people including myself have encountered sudden crashes to desktop due to some unknown problem which I hope gets patched soon. I only encountered one but others have been plagued by it. 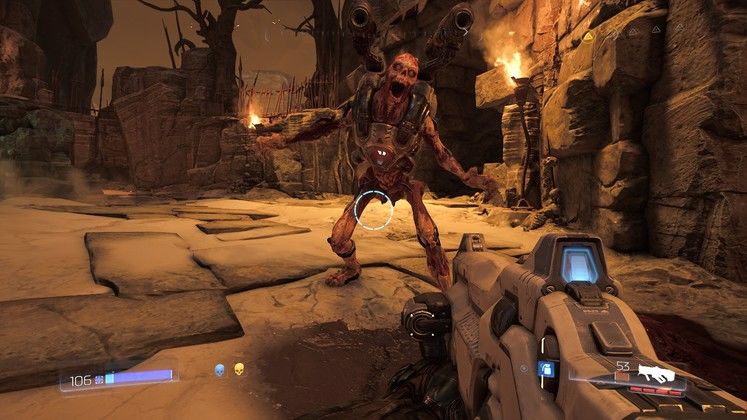 There are only two characters who talk in Doom, neither of which are the Doom Marine and both of whom play their parts but are very forgettable. I was a little disappointed with the audio side, to be honest. Doom’s sound effects are iconic, like the stomp of the Cyberdemon, the scream of the Revenant, or the corrupted laugh of the Arch-Vile. Even Doom 3 managed to give audio personality to the monsters. With the exception of the screaming Lost Souls or gurgling of the Pinkies I can’t recall what any of the monsters sounded like in this game. Same goes for the weapons or anything else in the environment, and definitely the screeching metal music. It’s all good, but none of it is iconic.

Doom is ridiculous, insane fun, and it’s also got a wealth of things to do. The main campaign on Medium (Hurt Me Plenty) took me about 10-12 hours and I only really started exploring in the second half, so I’ve got a lot to go back and find. Secret rooms, upgrades, collectable MarineGuy toys, fun Rune Challenges to get Marine upgrades, hidden Weapon Upgrades (which you collect by punching them), and a classic Doom map to be unlocked in each of the 13 levels. And that’s before we take multiplayer into account. There’s a lot of content here and all of it I thoroughly enjoyed. Well, less so multiplayer.

Oh yes, and there’s the SnapMap page too. It’s basically a powerful but easy-to-use built-in level editor combined with a Steam Workshop-like page that’s already filled with user-made playable content. There are different filters such as Recommended or Most Played, and offer single-player, co-op and competitive multiplayer. There are a lot of recreations of classic Doom maps on there already, and some truly batshit insane stuff too. I saw a Hell Whack-A-Mole level and one where you play as a Raccoon searching for food for your Imp babies. I wish there was proper mod support but this’ll do for now. 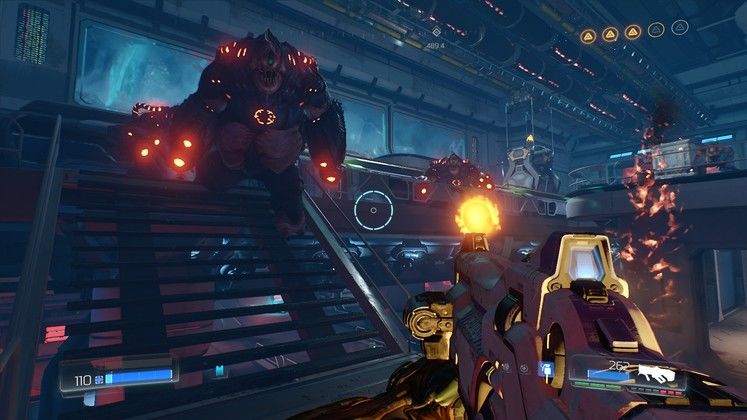 This looks like a job for the Big F***ing Gun

So before I sum up, how does new Doom handle my Three Pillars of Great FPS Gameplay? Tight compelling level design? Yes. The “just one more go” mentality is alive and well in Doom and at no point did I want to stop pressing forward. Superb enemies to fight? Yes, in fact the game gets better as it introduces more of them. It does omit a couple of old favourites such as the Arachnotron (who missed Doom 3 as well) and Arch-Vile and none of them are particularly scary anymore, but they’re satisfying and full of personality – and they even fight each other too! Never letting the story get in the way of the gameplay? Yes. The story is kept subtle, the Doom Marine only communicates by punching things, and you’re playing all the time. Funnily enough this made the story more interesting to me and I ended up reading all the optional lore I could.

After starting quite simply and feeling “fun enough” Doom quickly expanded into my favourite game of the year so far and certainly the most fun I’ve had with any game in a long time. Doom is tightly and elegantly designed, with fantastic enemies, compelling gameplay, a wealth of things to discover, surprisingly subtle storytelling, and an emphasis on fun. Yes it could’ve done with campaign co-op, the multiplayer is a little half-hearted (making the Season Pass somewhat redundant), and the audio design could’ve made more of an effort to meet the original game’s iconic standards, but the wonderful gameplay, hugely entertaining campaign, and SnapMap and it’s potentially infinite amount of player-made content (it even has co-op) puts paid to any minor complaints. Sorry Dark Souls 3, because you lost my savegames Doom is now my front-runner for game of the year.

Unleashing the BFG on a crowd of Hell’s toughest demons. No, not the new Spielberg movie. The good one.