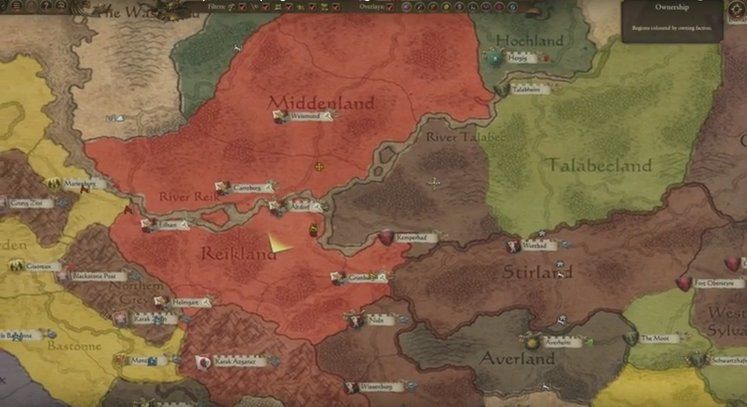 Creative Assembly has released a new developer diary walking players through the campaign gameplay of their upcoming strategy title Total War: Warhammer. The video covers the world map, which shows off faction territory claims and diplomatic alliances, as well as covering the royal promotions and appointments.

The video starts mid-campaign, 71 turns into the game, with the developer taking on the role of the Empire, who has claimed major territories from the hapless Hochland, which failed to protect them adequately. Meanwhile, Mousillon - a Vampire faction - has built up quite the empire to the West, having usurped its vassal lord Bretonnia.

Switching to an alliances overlay shows that most of the Empire's neighbors are allied with them, with only Mousillon and Nordland having active hostility. The alliances were drafted with wise treaties made earlier in the game. The newly captured territories in the North are still unstable, so a Hero, Emperor Karl Franz, is stationed there to fend off Orc attacks from Nordland. A quick look at him, ranked as a "Legendary Lord", shows off his skill trees, as well as the quests he must undertake to get more legendary gear to wield. 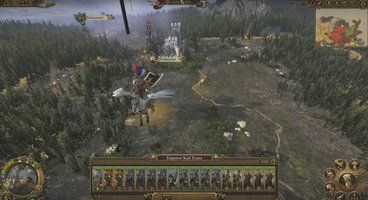 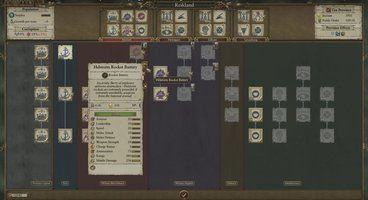 The other major mechanic shown off in the dev diary is the empire tech tree. As players build structures, new techs become available to research. Players can research buffs, improved weapons and armor, and other tech advances. Another screen shows off the building trees, with each level of types of buildings laid out so players can plan ahead with improving empire infrastructure and army equipment.

Finally, the overland will reflects the influence of the faction holding it. For example, Mousillon's land slowly becomes more and more of a dark wasteland as the vampiric influence extends itself outward.

Total War: Warhammer is due to be released on April 28th, exclusively on PC.