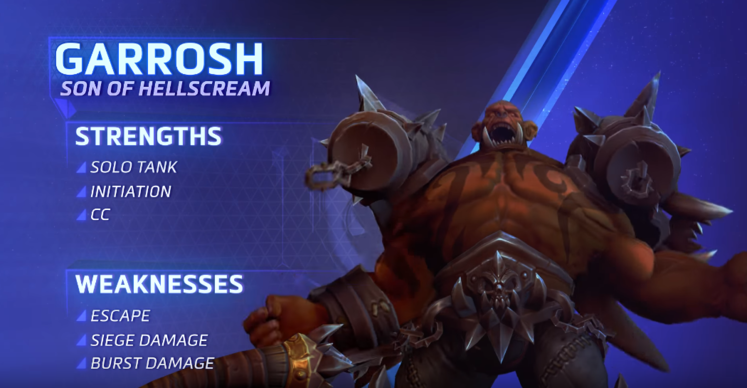 Blizzard is back to harvesting its multi-decade lore when it comes to new Heroes of the Storm characters - Garrosh Hellscream is the latest brawler to make the cut.

Announced around a week ago, today's the day players can lock in as the Warcraft villain and wreck havok with his popular brutality. Assuming you're willing to jump over to the PTR.

Garrosh Hellscream - whom Warcraft fans will know as the major antagonist of the Mists of Pandaria and Warlords of Draenor expansion packs. Arriving within the Nexus, Garrosh is set up to be a 'solo-tank' - meaning he's well equip to hold his own. His primary kit focuses on crowd-control and sustainability with his Bloodthirst (w) attack healing for 10-20% of his health depending on whether he strikes a minion or Hero character respectively. His Q ability 'Groundbreaker' drags any enemy caught in the outer reaches of its conal attack area toward Garrosh with his Wrecking Ball skill enabling him to throw a target to another location - good for singling out an opponent or launching them toward your high-damage team-mates.

As Heroes of the Storm typically allows players to spec into specific traits and skills as their character levels up within a match, Garrosh is capable of taking on a more defensive or offensive route to fit the situation at the time. He's either able to taunt nearby opponents or quickly cleave all those around him in quick succession. Again, with its branching trait system, many of Garrosh's abilities will gain extra little bonuses as he levels up. If you like to take a risk, Garrosh even gains more armour as his health decreases.

The more people who participate during the test, the faster Garrosh will make it into the public branch - regardless of whether a game-breaking bug is found or not.