Yes You Can Absolutely Play Nintendo Switch In VR, But Not In The Way You're Thinking

Back when Oculus was still pushing toward a consumer release, Microsoft stepped in to announce official Xbox One support. The Xbox Play Anywhere program basically nullified its purpose on release, but now it's possible to throw any console into your VR headset of choice - including the Nintendo Switch.

Most viewed Microsoft's little stunt as a way to say 'Yes, the Xbox One does support VR' in light of Sony's PlayStation 4 getting a dedicated VR headset. So what about Nintendo? They haven't ruled out adding some form of VR support to their Switch console, but those with a PC VR headset can already splice it in there. 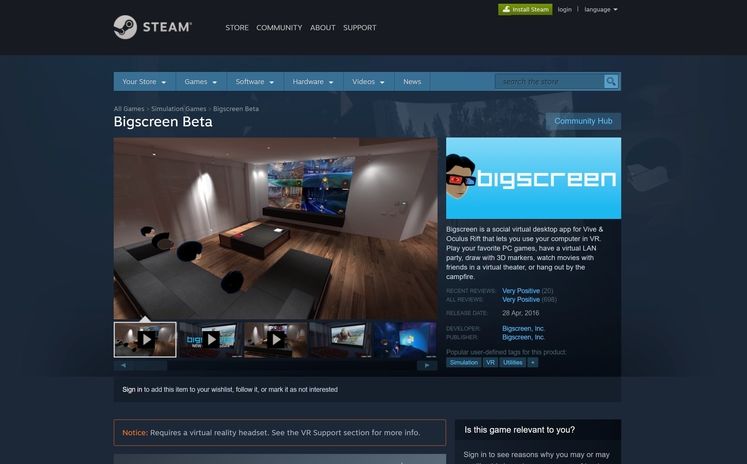 Just like Microsoft's idea, though, this doesn't little trick isn't going to have you running around Hyrule swinging your arms as Bokoblins. Instead, it uses a free third-party display injector app to pull the Nintendo Switch image feed from a capture card, allowing the whole docked Switch experience to be enjoyed on a virtual screen as big as your local cinema.

The Best VR Games You Can Play Right Now

While it probably shouldn't have taken this long for someone to pull this off, the folks running the Bigscreen blog have documented the whole process. Using nothing but a VR headset and a PC capture card, anyone who's attempted to start up a gaming YouTube channel should already be good to go. You just hook up your Nintendo Switch (or console of choice, really) into your capture card, load up the feed on streaming software like OBS or xSplit, fire up BigScreen through your VR headset and bask in some 100-inch blue shell bombings on Mario Kart 8 Deluxe.

So what's the point? It's Winter, so heading down into the woods to play your Nintendo Switch on a portable projector in front of the campfire isn't worth the hassle. With this method, you can do just that in the comfort of your own home without the risk of forest (or house) fires! We bet running around New Donk City while on a skyscraper could be pretty cool. Make it happen, BigScreen!