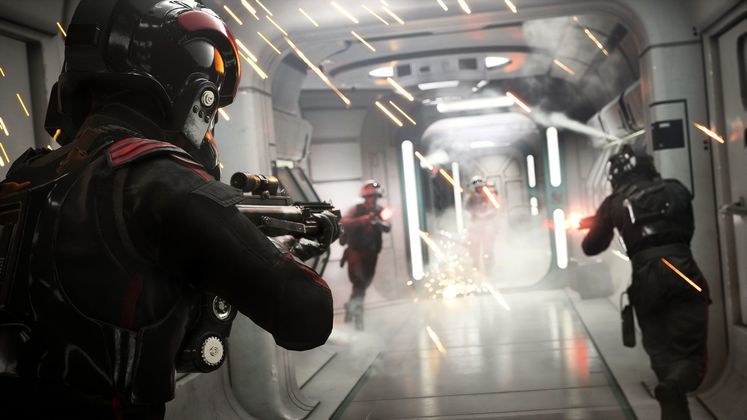 Thanks to social media nowadays, we often get access to people's direct, unfiltered thoughts and opinions. Given the uniquely interactive nature of video games, many developers take to Twitter to informally update the fans of their games on the status of a certain product.

After months of silence and accusations of censoring, EA has finally lifted the gag on Star Wars Battlefront II's team, and DICE devs often tweet about the status of the game and what changes they are currently working on. 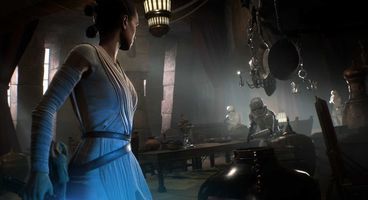 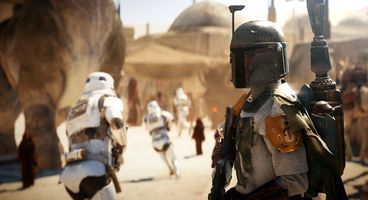 It was only a couple of days ago that we reported that Star Wars Battlefront 2's Design Director Dennis Brännvall confirmed that a Clone Wars-themed Playlist was coming to the game. Now he's gone further and confirmed that ALL Eras of Star Wars will get Playlists - that's Prequel, Classic, and Sequel.

@and yes all eras

Presumably these Playlists will start very soon, and we would not be surprised if the Clone Wars Playlist will be first to go along with the next Season when it starts.

In addition to the Obi-Wan content below, another clue dropped over the weekend that the Clone Wars is the next time period getting some love. According to the Design Director, there's a Clone Wars playlist coming soon.

Given the game doesn't currently have a lot of prequel maps, this may indicate that the next content drop will indeed focus on the massive war happening between Episodes II and III. 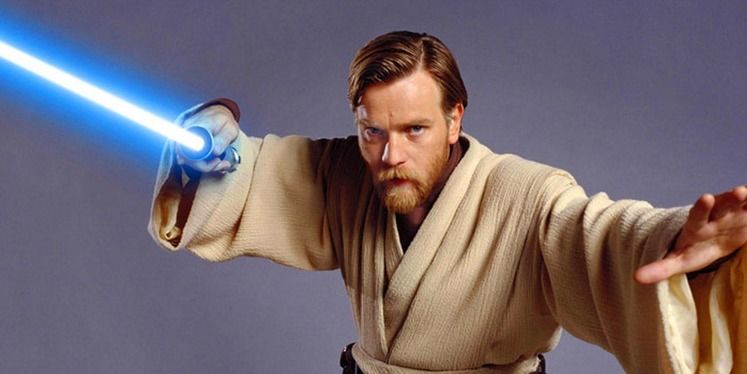 Star Wars Battlefront 2 Design Director and one of our favourite people Dennis Brännvall ended the day with an enigmatic tweet. While Dennis has denied that his frequent Clone Wars hints (see update below this) has anything to do with the frequent rumours that Battlefront 2 Season 2 will be based around The Clone Wars cartoon, his latest tweet seems to hint at this again - while also hinting at the Hero character coming for it.

And remember, you can kill me, but you will never destroy me. It takes strength to resist the dark side. Only the weak embrace it.

You can watch the quote here. It's from The Clone Wars - Season 5 Episode 16: The Lawless, and was said by Obi-Wan Kenobi to Darth Maul (who already features in the game). Many players are taking this as a strong hint that Obi-Wan Kenobi will be the Hero for the Clone Wars campaign. Presumably if true General Grievous, Count Dooku or Asajj Ventress will be the Villain.

It's possible Dennis is trolling fans, or just being a Star Wars nerd, but the frequent hints and nods seem to really be suggesting something more.

EA has officially announced progression changes are on the way, but they may not be as quick as most players hope. While a huge portion of the playerbase is anxiously waiting for new content and a new free DLC season soon, the truth is they may be a few months away.

Over on Twitter, someone got carried away by a Clone Wars tweet from Design Director Dennis Brännvall‏. In a reply, Brännvall‏ stated that he was not teasing anything, and clarified that any meaningful change coming to the game needs to wait for a while.

I'm not hinting at anything tonight. I'm just hanging out. I realize you're eager for EVERYTHING to come out NOW but it's going to take a while. We have some cleaning up to do before we get to the good stuff. Hang in there.

Progression and Career is first on the list, obviously. We'll try to keep you entertained with some light content until we're ready for the big stuff later on.

It's not a surprise, given the status of the game. Question is: how many players will stick around until Battlefront II fixes itself?

As word of hero balancing makes the rounds, one of DICE's hero designer Guillaume Mroz voices a couple of small tweaks coming to two of the game's heroes.

Hey! I've seen concerns about Bossk and Rey's nerf :)
So I'll just be more clear, because they will be somewhat small:
-Rey will probably see only Insight's radius reduced a bit.
-Bossk, I found an issue with a star card that explains why he is so high.

Over on Twitter, Design Director Dennis Brännvall‏ was swarmed with fans questions after the censure lifted, and most of his replies are brilliant teases filled with fan service.

From skins and nerfs to technical and aesthetic questions, Brännvall‏ answer queries with a mix of straightforwardness and just the right amount of non-disclosure.

Tune for when I'm 'tweaking' the progression system. https://t.co/S0HHnHtDIj

Check out a summary of Dennis' best tweets and why his attitude is the right one.

With EA, DICE and the various developers behind Star Wars Battlefront 2 still deathly silent even regarding future plans for the game, EA Community Manager Mat Everett has posted this cryptic and rather troubling tweet.

When your hands are tied and everyone is looking wondering why... trust me I know.

You may remember Everett from the "armchair developers of the internet" comment that went viral.

Everett suggested that the viral post was nothing to do with Battlefront 2, and indeed this recent tweet may not have anything to do with the game - but since the facts are that EA promised Q&As, updates, and communication which have not appeared we can imagine that a Community Manager such as Everett is probably extremely frustrated to have his "hands tied" by EA, and be unable to tell us why all the silence.

Afterwards, Everett posted an official response on the Battlefront 2 forums regarding the recent developer silence - and what EA and DICE will be doing next. 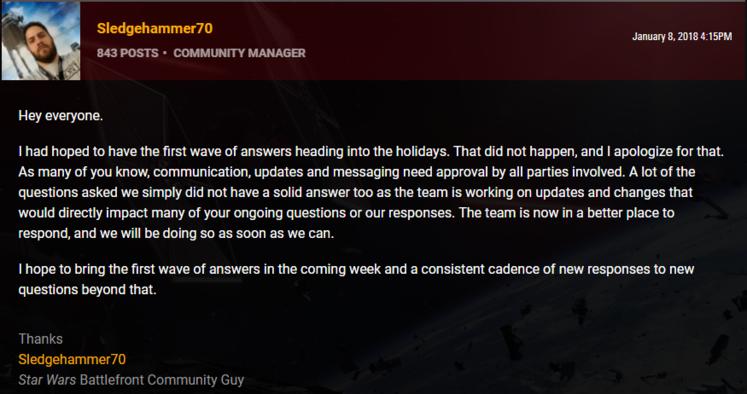 You can read the post in context here. Of particular note:

We should hopefully be getting answers to players' questions and an end to the silence from EA and DICE, although there is still no guarantee it won't happen again. Battlefront 2 has been without a patch since The Last Jedi update, so hopefully we'll get that too.