The best Star Wars game ever, or EA’s greatest folly? Find out! 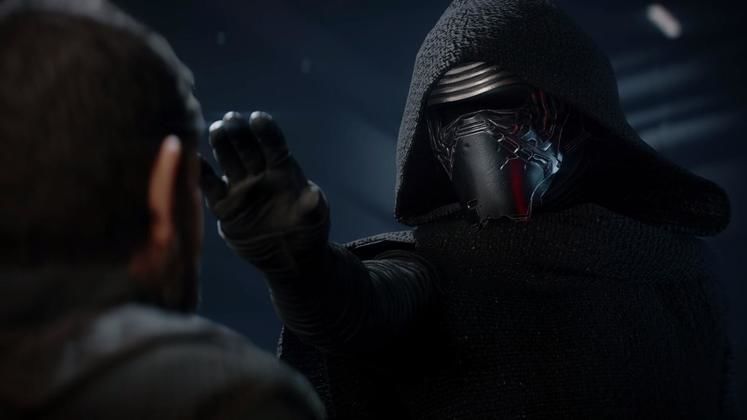 We wanted to put aside everything said about Star Wars Battlefront 2 in the news, all the controversies regarding Loot Crates, microtransactions and progression issues, and review the game with a clean slate. Unfortunately playing Battlefront 2 makes that impossible. There’s a lot of good here, but EA have ruined Battlefront 2 with greed. Let us explain how.

Will Star Wars Battlefront 2 even get a mention on our list of the Best Star Wars Games on PC? Our updated list of Star Wars Battlefront 2 Patch Notes! In comparison with the first Battlefront, there is actually a lot to offer gamers here. On the offline single-player side there is a full decent-sized story campaign, fun Arcade battles and the ability to play a lot of the maps with bots as any character, including Heroes. Online there are Starfighter Assault battles, massive Galactic Assault battles with multiple shifting objectives, Blast for quick deathmatch, Strike for a single-objective fight, and Heroes Vs Villains if you just want to play as the Hero characters. Each have a lot of maps to play, and more will be coming for free. That’s a lot of game there. 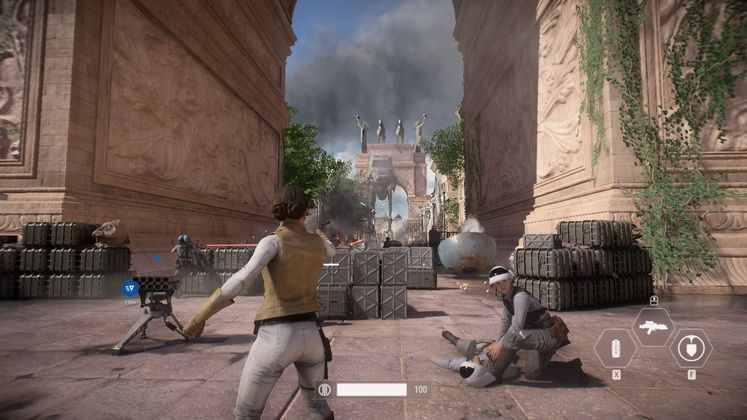 The story campaign is, honestly, actually pretty good, at least for no-brain Star Wars geekery. It tells the story of elite Empire commando Iden Versio and her Inferno Squad, and how they lead the retaliation of the Empire against the Rebel Alliance after the Second Death Star is destroyed. While Iden is the main character there are “interludes” featuring popular Star Wars characters which are a lot of fun. While rarely amazing in gameplay terms the story is quite entertaining and it makes for an engaging arcade-y spectacle set in the time between Return of the Jedi and The Force Awakens, with loads of references for fans to get.

I really enjoyed it, although it ends a bit abruptly – the next part’s coming as free DLC, for some reason. Is this and the Arcade stuff enough to justify a purchase? Probably not, unless you see it at a ridiculously cheap price. The high production values and sheer Star Wars love on display make it enjoyable to play, and it’s a post-ROTJ story that isn’t a book or comic, which was rare even before Disney took over and wiped the canon. You’ll be done with it in a few hours and it’s not much of a challenge, though. 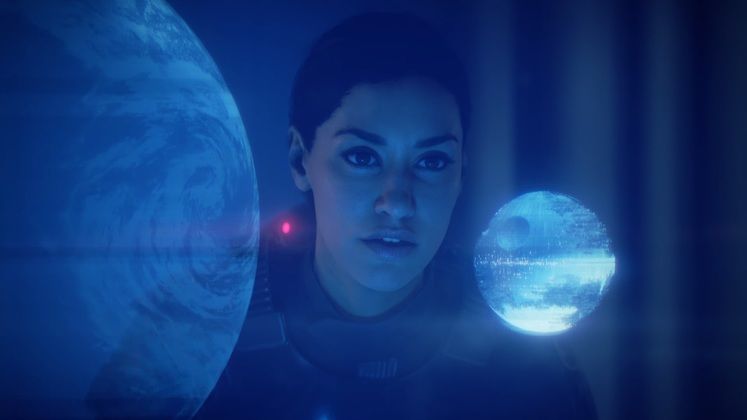 So, on to the multiplayer, which EA have screwed up completely. While it all leads back to Microtransactions and the desperate desire to get as much extra cash out of customers as they can, the real source of the multiplayer problem is the ability to upgrade characters with gameplay-altering powers. The fact that these are tied to the Loot Crates and a sense of randomness doesn’t help, but being able to upgrade classes and Heroes and give them new powers means that, if you don’t have the upgrades, you won’t have any fun. And won’t want to play the game.

I started playing Battlefront 2 the instant it officially launched worldwide. I was under the impression that the Early Launch was only for a small number of players. I died a lot, and every single death was to a player with a fully-upgraded character and a suite of Maximum Tier 4 Star Cards. 70% of my deaths were to Thermal Detonators with the Tier 4 Improved Detonators card, which everyone seemed to have because they all bought the Deluxe Edition which got them for free. And this was the instant it launched! It’s only going to get worse! 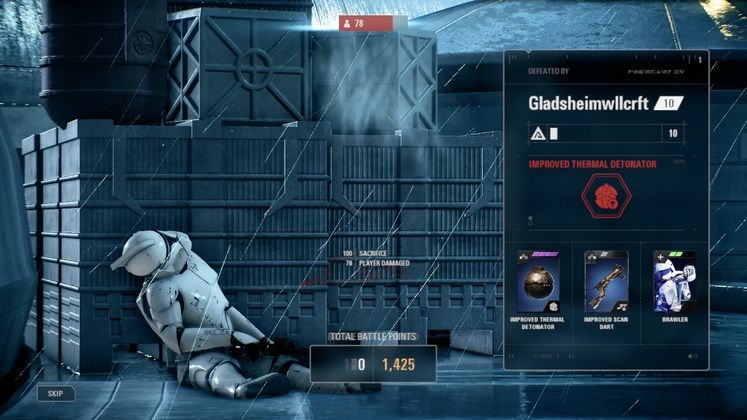 Every single new player to Star Wars Battlefront 2 is going to have a miserable experience for their first hours of play. People who play these games too much are a problem in any multiplayer game, but armed with significant upgrades that give them a massive edge that new players won’t have for hours of play – or a lot of money spent on Loot Crates? That’s just not fun. On my first time playing Kylo Ren I took a soldier by surprise and was wailing on him with my lightsaber for several seconds, and not only did he not die, he killed me first. Just because he had all his Class upgrades and I didn’t. Oh, and in-match Hero prices have been increased, so that even if I played really well most of the time I never saved up enough to get one before the match ended.

All of this renders the good DICE have done with the game nearly irrelevant. Fortunately there is plenty of good, but it’s an uphill struggle to get it. Galactic Assault can be pretty epic, particularly on levels like Endor or Naboo where you’re literally repelling an invasion – or undertaking one. “Squads” still can’t be setup manually for friends, but at least they’re always highlighted now so the game subtly pokes you to stay in a group. Starfighter Assault is just straight, superb fun, although I am sad there aren’t any Assault levels where you start off in fighters and move to the ground, like in the first game’s Death Star DLC. Strike is simple fun with no heroes or vehicles and only one objective. 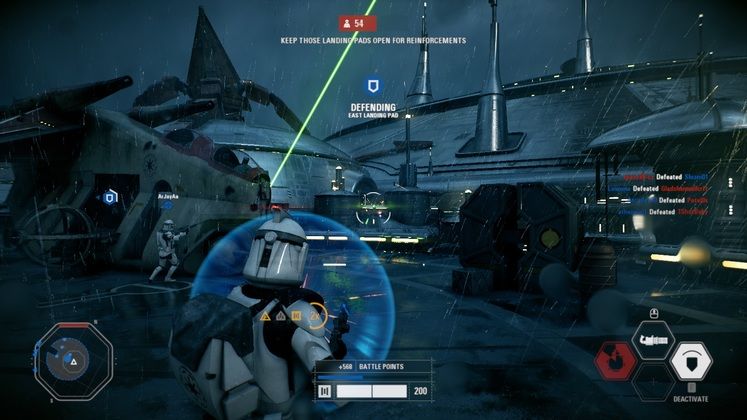 Our test system is an AMD FX-6300 Six-Core Processor, 16 Gb RAM, Nvidia GTX 1050 Ti 4Gb, and Windows 10 64-Bit, and we had most settings up to Very High if not Ultra and the game not only looked great, it ran totally fine. No matter what you say about Battlefront 2, it’s a utterly gorgeous game with some wonderful effects and pure Star Wars feels. The sights, sounds and smells all feel Star Wars, and top it all off – it loads quickly too. Bizarrely it sometimes takes longer to get out of the game than it does to get out of it, but that’s a minor thing. 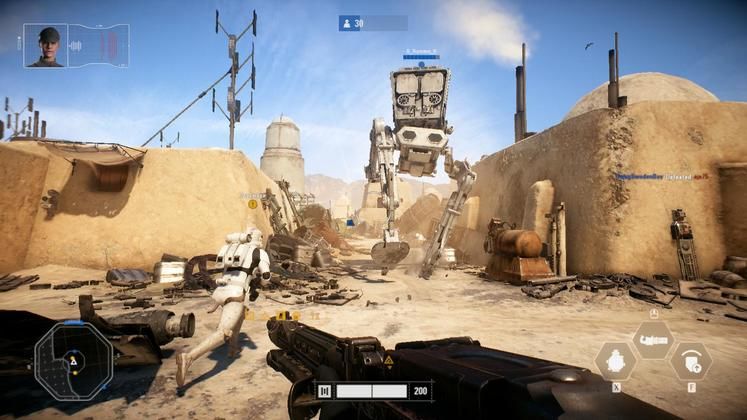 Star Wars Battlefront 2 could’ve been game of the year, but some key mistakes basically ruin the whole thing. The progression system being randomized in Loot Crates and players getting significant game-changing upgrades, many of which were paid for, are the main offenders. With every player stocked up with Star Cards that give them massive advantages new players face a long uphill struggle, and it makes Battlefront 2 a chore to play.

Which is upsetting, because DICE have put in so much effort into all the maps, modes, and Classes, and really nail the Star Wars feeling. When it works it’s a gorgeous spectacle, an imaginative and epic shooter with some wonderful objective-based ideas. Then you get blown up by an Improved Thermal Detonator for the 23rd time while other players shrug off your rockets and the fun oozes out immediately. The single-player campaign is simple but entertaining, however it can’t save Battlefront 2. If you’re desperate for Star Wars you’ve got no other choice, but if you want until a sale the game will be even more unbearable to play. Get Wolfenstein 2 instead.

Finally unlocking and playing as a hero in a match.