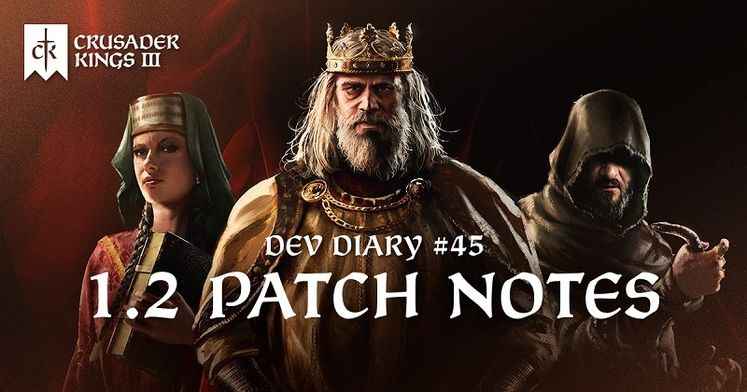 Update: Crusader Kings 3's Update 1.2 is now live, its patch notes revealing the addition of the Ruler Designer, kill list and much more.

Below, you'll find all the changes and additions that CK3's Update 1.2 introduces to the grand strategy RPG game, as detailed in the full patch notes:

Original: Crusader Kings 3's Patch 1.2 is slated to launch before the end of 2020 and Paradox today revealed that it will introduce uglier characters, while seeing the kill list and attach to army features returning.

The Kill List will only contain dead characters you know about while also providing details about how and when they met their end.

This sounds like a neat way to keep track of the efficient murderers around you without shattering the veil of secrecy that makes CK3 so fun to play and your character very likely to end up on someone's Kill List.

Patch 1.2 will also allow you to attach your armies to any allied force in the same region. The AI could do this since launch, but after having to constantly micromanage rabbles of 500 peasants in bigger wars, this is one addition that we welcome wholeheartedly.

Realm priests can be a bit of a pain to deal with, but Crusader Kings III's next patch makes it so that having a strong hook on them passively forces them to endorse you regardless of how much they hate your guts.

Visual improvements aren't being overlooked in CKIII's patch 1.2, either. Tribal settlements are getting an additional tier of walls for their lowest level alongside buildings like longhouses or yurts, depending on their region.

The dynasty UI will not just make it easier to see which Legacy tracks you unlock but also more clearly explain how a House Head is chosen.

Rally points will split your armies depending on the region's supply limit, spreading your troops across adjacent regions.

Ugly characters also become uglier in Patch 1.2. Aside from having their skin texture changed and their facial features made "more extreme", the game will pick one feature to especially ruin.

"This can result in a character for instance having a particularly messed up nose, a face that’s too small for their head, or the tiniest mouth. Focusing on small feature sets like this helps ensure that ugly people are varied in their ugliness, and more readily identifiable as 'ugly'." a recent developer diary reads.

You can read more about them, the changes to the Suomensko religion, and other incoming changes in the latest developer diary.

Paradox has also confirmed that saves made in CK3's 1.1 version will be compatible with 1.2, while also teasing a release date reveal during tomorrow's live stream.

The Ruler Designer will also be a free addition introduced in the upcoming patch. Crusader Kings 3 is out now on PC.

Check out the best mods currently available for Paradox's latest entry in the grand strategy series.