Crusader Kings 3 Faith and Fervor, A Guide to Religion

This being a portrait of medieval Europe, Crusader Kings 3 has a lot to say about Religion. Medieval life was full of controversy and power struggles between the faiths and you'll regularly see rulers and counties embrace the newest must-have heresy. In this guide we will look at the basic aspects of religion that you need to know, and take a peek at the Doctrines that live in the background of your rise to power.

To begin we'll look at the Religion screen that can be found at the bottom left of your screen. Clicking this switches the map to the religious map mode and brings up the window for your current Faith. This window lists a lot of information but don't get too bogged down in the details for now.

If you're playing a Catholic start and are at all familiar with Christianity it will be rather intuitive, but we'll start with the simple and work our way up. 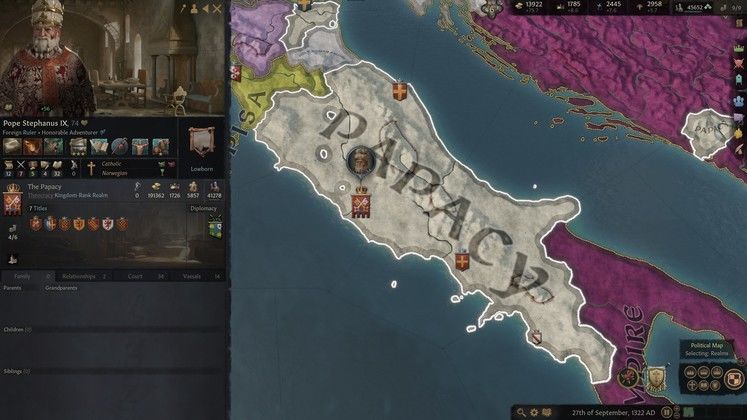 Most religions have a Head of Faith who oversees religious matters. If a Head of Faith exists they fall into two types, Spiritual and Temporal, each with distinct traits.

Piety comes from a monthly tick and special events and is used as religious currency. This currency is used to declare Holy Wars and buy favours off the clergy.

The level of Devotion dictates how clergy of the Faith look at you, ranging from neutrally at Dutiful, through Faithful, Devoted Servant, Paragon of Virtue, until you reach the massive +60 for being a Religious Icon. This rises with your Piety, but is not tied to any specific values. By this we mean that you can spend Piety without losing Devotion levels. The only way to actually lose levels, is through various events which can take you all the way down to the negative Sinful status.

Sins and Virtues are the personality Traits that characters can possess. Some of these are considered good and some evil. A character will get an opinion modifier for having any of these depending on the Faith of the observer.

Take for example, Compassionate. Along with various modifiers that affect normal gameplay, there is also a separate grouping for the Faith opinion. In this case Compassionate is considered Virtuous to Catholics which grants +10 opinion from Catholic characters. It also gives +1.0 Piety/month.

This Faith modifier is the same for all Virtues listed in the Catholicism window, and the Sins are the direction opposite, each losing 10 opinion and 1 Piety per month. These Traits will also heavily affect events and Stress levels but that's not for this guide to discuss. 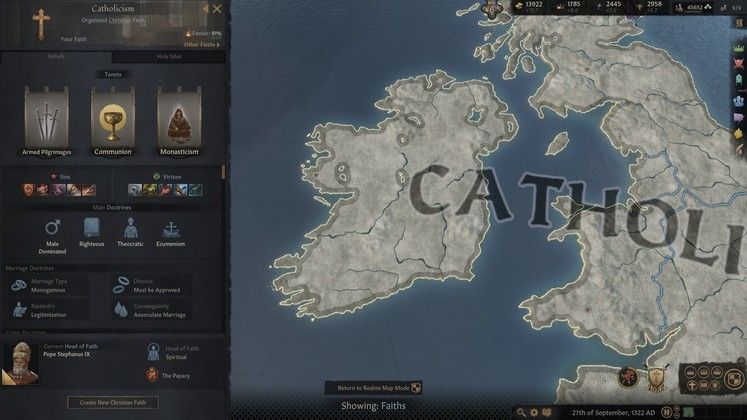 Tenets can be considered to be the rites of the Faith and every religion has three, with some overlap between similar Faiths. To continue our limited look into this, we'll go through the Catholic Tenets but this is no means exhaustive as Paradox have included well over a hundred total Faiths with many more Tenets.

So, as we can see, some of these offer real tangible benefits to being a member of that Faith, although if you look into some of the smaller Faiths you will find arguably better Tenets. For example, Cathars have the Consolamentum Tenet which decreases Short Reign duration by 50% and gives the option to commit suicide when old or infirm without the usual penalties.

The Tenets aren't the only thing that set Faiths apart, many of the laws of a belief system fall under Doctrines. There are Doctrines for most aspects of life falling under Marriage, Crime, and Clergy along with a Special category. Each of these spell out what you can and cannot do, making them essentially religious law. Taking Divorce as an example, we can see that in the Catholic Faith, this must be approved by the Pope.

Each Faith also has a set of Main Doctrines which lay out their core ideals. In the case of Catholicism this means being a Male Dominated society that tightly restricts the role of women in every way while having all Temples held by a Realm Priest who then serves their liege as a Theocratic Vassal. 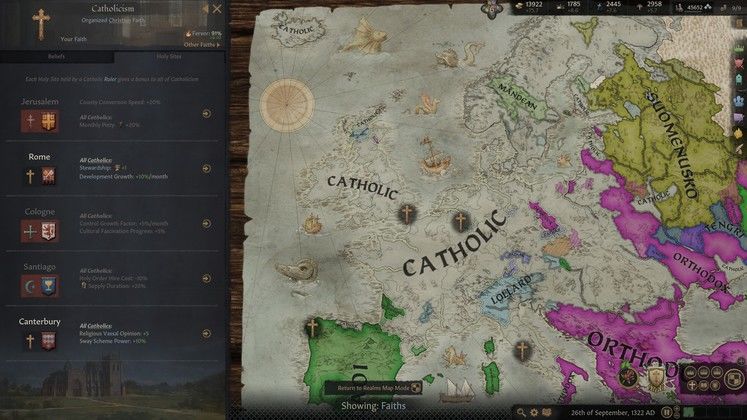 Each Faith has its own collection of Holy Sites scattered over their historical reach. Each Holy Site grants a bonus to all rulers of that religion if one of them controls it. Many of these are small modifiers but they could still be useful to you depending on the Faith you follow.

Note: At time of writing some of these do not apply their bonuses correctly, but most appear to work fine.

Pilgrimages are decisions taken by a character to travel to a Holy Site. This journey is filled with dangerous opportunities and just plain danger, but completing it gives the character Piety and other rewards such as Traits.

We have covered Holy Orders in more detail over in our Troops Guide but suffice to say they're mercenaries that you pay for with Piety to fight other Faiths. 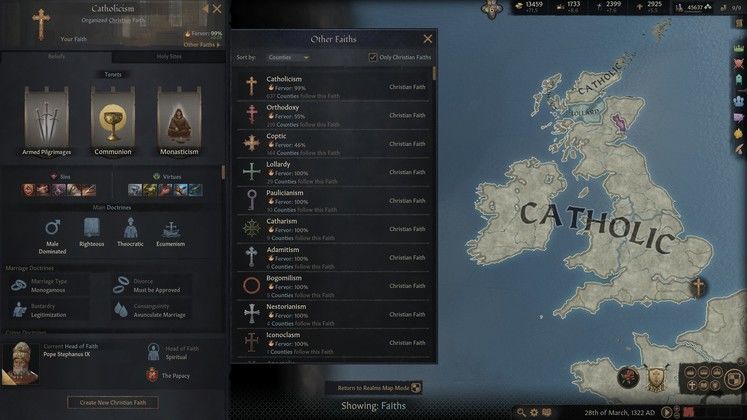 Fervor represents the level of commitment that members of the Faith have towards their church. A high Fervor makes it easier to convert Counties to your Faith and more expensive to create your own.

Various events will often trigger in the background that can affect Fervor but for the most part, large Faiths have a lower percentage than smaller ones. The number can also be changed through Holy Wars, as waging a war will reduce, and defending against will increase.

As a bit of an aside, directly under your Fervor percentage at the top of the window is an option for Other Faiths which shows you a listing of every available Faith and how many Counties they are in. As you click through them, the religion window will show you what they have to offer and the map mode will change to show their Holy Sites. 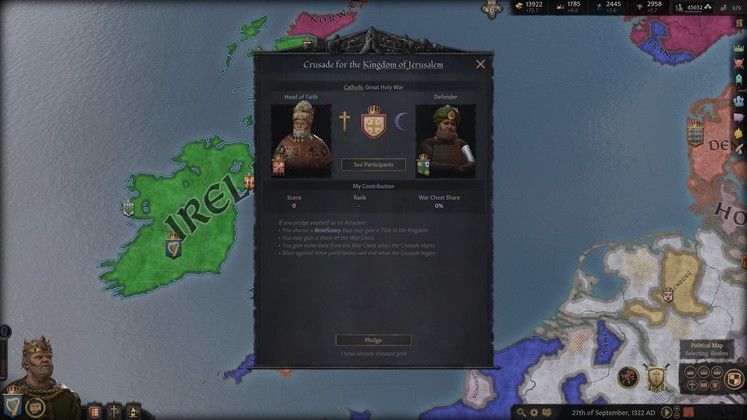 Many Faiths allow Holy Wars, that is a war against an alternate belief system. The Abrahamic Family of Faith allow Holy Wars against everyone while the Eastern Families only allow them to be fought against outside Families. Pagans can fight them against everyone, but they need to be reformed before they can do so.

Should a neighbour sharing your religion come under attack in a Holy War, you can choose to fight by their side regardless of Alliances. This can go against you if you're the aggressor though, so make sure you weigh up the full strength of a Faith before you declare on one of its rulers.

Great Holy Wars can be declared by the Heads of Faith in certain religions. They fall into two types, Directed and Undirected depending on the type of Head.

Holy Wars aren't the only way to turn a population to a new Faith. The most common way is the Council action Convert Faith in County. We look into this more in the Council Guide but basically you will send your Realm Priest to preach to your wayward subjects.

You can also use the Demand Conversion interaction on the character screen. This has several potential outcomes, and depending on what you are trying to do you might want different results.

Normally you'd want them to simple accept, but that isn't always in your interests. A heretical Vassal who refuses to convert becomes a Criminal and is free to imprison without incurring Tyranny. This is a fantastic way of dealing with a Vassal who is being a pain and as a prisoner they cannot join factions or rise against you.

An even better result in some cases is that they avoid your arrest and rise against you, which is often the case with Powerful Vassals who could pose a threat to you. The advantage of this comes because they are Criminal and will fight without dragging you into a full scale civil war. Once you have defeated them, you gain the right to Revoke Title without the penalty. You can only do this once, but if they have acquired a Duchy you can strip them of multiple Counties all at once, then ransom the now weakened character to pay for your war. 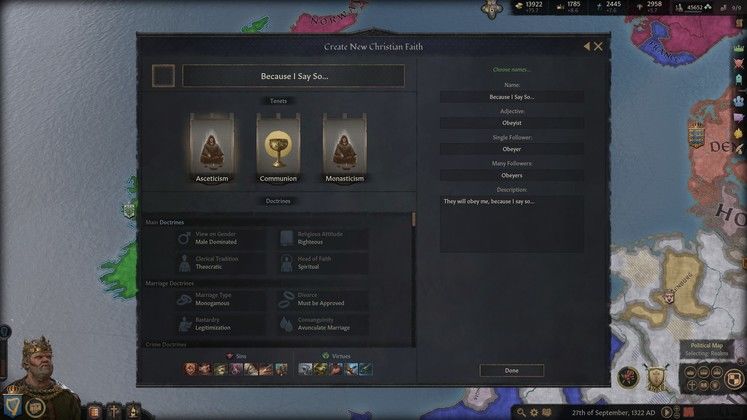 If you've gotten this far, you must really care about knowing all there is to know about Faith - or at least the little that is in this guide. The final act here is creation... that is the founding of a new Faith.

Be aware that doing this turns your former Faith into enemies and costs a substantial - some would say impossible - amount of Piety depending on how you choose to set it up. If you are insistent on building a new religion, we would heavily recommend looking at the Learning Lifestyle and spending a few points in the Theologian tree. This can get you the Prophet Perk, which halves the cost of creation.

If you want it cheaper still, it is a good idea to bide your time and wait for your current Faith to have low Fervor as this also substantially reduces the costs involved. 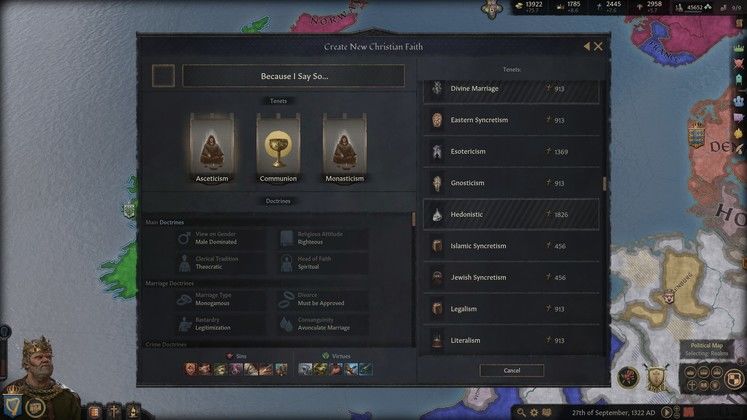 To begin the process you will see Create New Christian Faith at the bottom of the religion window. This brings up a new screen where you get to choose a name for your religion and then tweak all the different aspects of it. There are various rules for what options are compatible with what, but for the most part you can do anything from making a female dominated, polygamous faith, to a cannibalistic sex cult, either one can feature you as Head of Faith or with a new Spiritual leader who sits in judgement of your sins.

For our full thoughts on Crusader Kings III and to see why it made our list of the best PC games of 2020, give our review a read.