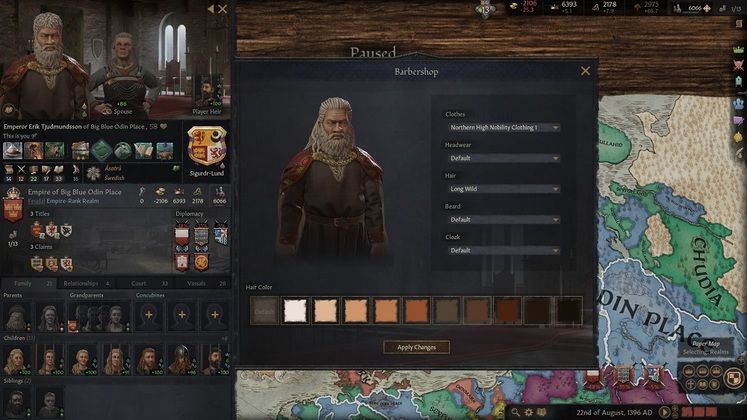 Crusader Kings 3 focuses on individuals rather than entire nations and, with its imminent launch, players are likely wondering about the character creator options available on day one.

Although Crusader Kings 3 gives you plenty of opportunities to alter and improve characters' traits and skills starting as early as childhood, it will not launch with a Ruler Designer. Instead, its character customization will initially be limited to its Barbershop feature.

While the lack of a Crusader Kings 3 Ruler Designer at launch will disappoint those who enjoyed using CK2's character creation to customize every little detail down to individual stats and traits, Paradox has confirmed that it will be introduced post-launch. 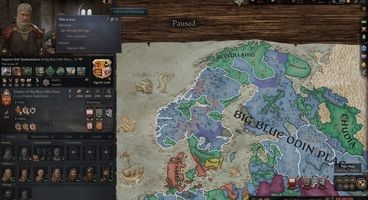 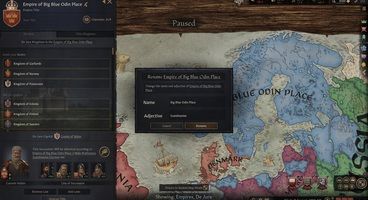 Crusader Kings III's Barbershop might not act as a full-on character creation kit, but nonetheless lets you change certain elements of your active character's appearance.

To access the Barbershop, you need only right-click on your character's 3D portrait, then select the middle icon in the upper right corner of the newly opened window. More specifically, it's the one that resembles a pair of scissors.

Left-clicking it will show you the currently available Crusader Kings III character creator options which allow you to change the clothes your ruler wears, their headwear, hairstyle and color, beard, and cloak.

CK3's Barbershop lets you dress up your character in garb that's found in other regions of the world. Giving our Norse emperor a turban and picking a different beard did do a good enough job of making them look like someone else.

While you can't design your coat of arms nor rename your dynasty, you can rename your house and any title that you own. Simply click on their icons and you should spot a small icon resembling a feather and quill next to their names.

To recap, here are the Crusader Kings 3 character creator options present at launch:

While that might not be the Ruler Designer itself, it's a neat tool that showcases how powerful CKIII's new portrait system is.

Paradox has confirmed that the Crusader Kings III Ruler Designer will be out before the end of 2020 and available for free, while offering a small preview of what it's capable in the video below.

Did we tell you? The Ruler Designer feature for #CK3 is coming later this year, for free! ✨
What great characters (or atrocities) would you create? pic.twitter.com/jx382Urwpp

We'll be sure to update this post as soon as we learn anything new about the introduction of the Crusader Kings III Ruler Designer or any other news related to the game's character creator options.

For our full thoughts on Crusader Kings III and to see why it made our list of the best PC games of 2020, give our review a read.