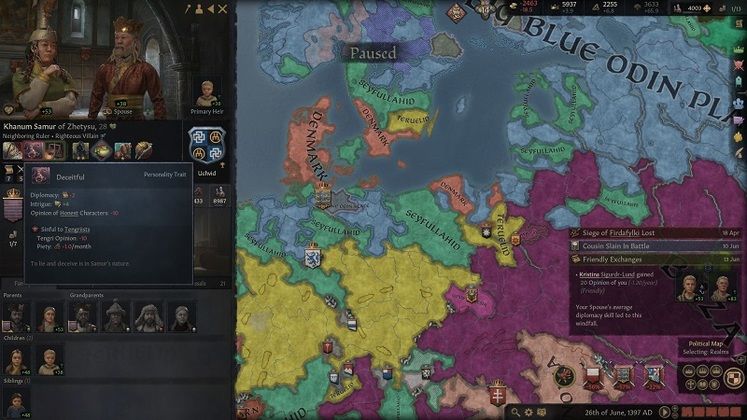 In Crusader Kings 3, Traits come in many flavors and from different sources, not just defining a character’s personality but also their skills or well-being.

Characters start off with a set of traits with both positive and negative effects and can gain quite a few more traits over the course of their lives, based on their actions but also circumstances.

This guide aims to point out the different kinds of CK3 Traits and give you a general idea of why they're important enough to always check, not just those that define your character, but also everyone else they're interacting with. 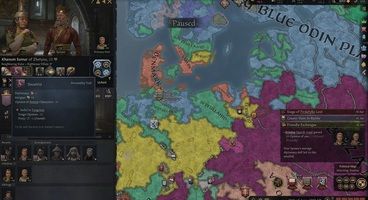 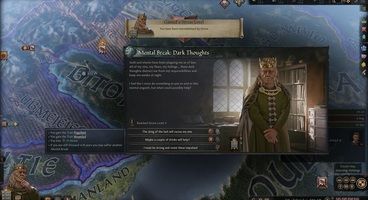 To start things off, you can see any character's Traits by left-clicking on their portrait. Afterward, look for the row of square icons below their name and above their skills.

The number of traits a Crusader Kings 3 character boasts depends on how eventful a life they've had. It's not all about quantity, though, as certain Traits have multiple ranks that increase their benefits.

They can also grant access to specific event interactions. A Callous character can be rude to a fellow feast attendee because that's who they are, while a Shy character will like you more if you help them avoid interacting with others.

Each character in Crusader Kings 3 has three core Personality Traits that define who they are. Personality traits include ones like Zealous to Gregarious or Deceitful, each impacting not just a character's skills but also resource gain and their opinions of characters defined by the same Traits as well as opposing ones.

A Zealous person will be more inclined to like fellow zealots while harboring an inherent dislike of cynics who don't quite value their faith as much. Similarly, a trusting person is more prone to falling prey to hostile schemes.

Personality Traits also play into CK3's Stress mechanic. Acting against your personality makes you incur stress. Executing or imprisoning people without a reason will lead you closer to breaking if you’re Just while Sadists will feel at odds with themselves if they knowingly avoid an opportunity to cause pain.

Hitting Stress thresholds can result in characters gaining negative traits as they turn to drink, brothels, or self-flagellation to calm their mind. CK3 Personality Traits can be molded to some extent during childhood, however, they largely constitute a challenge you'll have to adapt to as new rulers sit on the throne.

Each child receives a Childhood Trait as they grow up. These provide small bonuses to two of the five available skills while suggesting the type of education that would best suit them.

You can choose to educate children in a different field, but fitting the Childhood Trait with the proper Education focus and a Guardian that excels in the related skill can lead to them receiving stronger versions of their Education trait upon reaching adulthood.

If your character is the guardian of a child, they can directly influence the Traits received by their ward through events that appear as they grow up.

Education Traits come in several ranks and are tied to one of the five character skills, increasing it by a flat amount while granting an experience boost to the Lifestyle associated with the same skill.

As an example, Intricate Webweaver points out characters whose education was concentrated on their Intrigue skill, making them better schemers. The Trait itself gives the character +6 Intrigue and 30% more monthly experience to the Intrigue Lifestyle.

At the end of each Lifestyle tree waits a Trait that has a strong, positive effect, marking a character's mastery in their chosen field after years of improvement.

Certain Decisions and interactions tied to a character's Lifestyle may also grant Traits. A character following the Martial lifestyle can improve their understanding of different aspects of war through events that take the guise of practice sessions.

Congenital Traits can only be inherited by offspring and generally dabble in extremes, either being positive ones like Gorgeous and Quick or negative ones like Club-footed and Ugly.

You'll find that most physical traits fall under this category and, should two characters with Congenital Traits have children, there's a chance that they'll not just pass them on but also reinforce them, granting their offspring stronger versions of their Congenital Traits, regardless if they're positive or negative.

Health Traits in Crusader Kings III reflect a character's physical and mental condition. They range from being Pregnant to being Wounded or afflicted by the Black Plague or Lover's Pox.

Traits like Melancholic or Lunatic also fall under this category. Generally speaking, you'll want to do your best and stay away from battle if you're wounded, cure diseases using your Court Physician, and pray that your Lunacy doesn't flare up too often.

Fame Traits are all about what characters do or circumstances surrounding their birth. If characters are Bastards or of muddled heritage, that'll be reflected in a trait that affects other characters' opinions of them.

Some other Fame Traits come as a result of engaging in fun stuff like adultery, murder, or slaying your kin. You'll also find positive ones as you perform different actions, however, our court was particularly prone to attracting Adulterers, for some reason.

Commander Traits benefit army commanders, granting them different bonuses when fighting in specific conditions. Usually obtained from a Martial education and lifestyle, they can also be granted through other means like events that see expert commanders teaching those under them new things.

These Traits range from those reducing siege time and friendly casualties while defending to those granting bonuses when fighting in different types of terrain.

Aside from the usual spot, you can always see a commander's traits when selecting their army, on the lower-left corner of the screen, or when selecting two armies engaged in combat.

With Crusader Kings III Traits covered, check out our other guides on succession, the council and console commands.