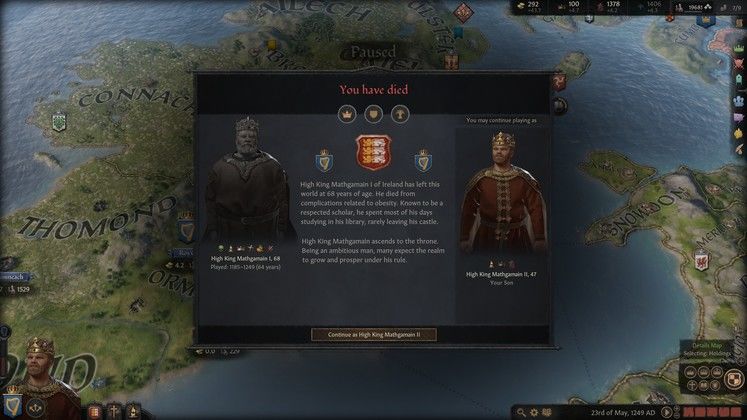 The only real key to success in Crusader Kings 3 is succession, and the only way to fail is to die without an heir. This makes it your main task throughout the game, whether you're a simple count or exalted emperor. This guide's main purpose is to go over the basics of how it works and then to dive into how to make it work for you.

To begin with, succession is easy to understand… when your playable character dies, you take over the life of the heir to your primary title. But, this is also where it can get complicated depending on the Realm Succession Laws. These laws determine who has the right to inherit, who gets priority, and the basis for division of titles. 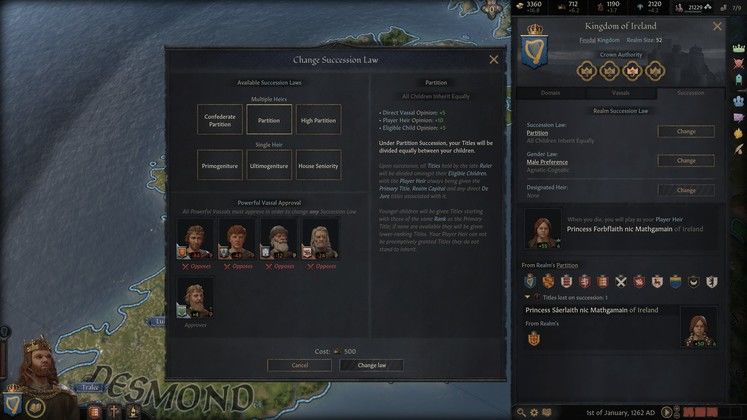 At the start of the game, and well into the first few centuries, you will only really have access to gravelkind succession which divides your lands amongst your eligible children. By default this means that your eldest son will inherit the Primary Title along with the Realm Capital and any direct De Jure titles associated with it.

If you have multiple children eligible for inheritance, the others will be given titles starting with those of the same rank as your primary. For example, if you are the king of two countries, the second oldest son will take the second kingdom on ruler death. If no equal titles are available they will be given lower ones. At the most basic level of Confederate Partition, the game will automatically create lower titles for them to inherit (such as duchies), while with Partition and High Partition it won't, meaning you can avoid losing duchies by simply not creating them.

At High Partition, the player heir will always inherit at least half of the titles. Even so, any form of partition will cause problems keeping your country intact. For that the best option is to move onto the Single Heir systems but it takes a long time to unlock these through the cultural technology system.

Be aware, that you will have five Powerful Vassals made up of the strongest of those beneath you and they all need to approve of you in order to change any Succession Law. These Power Vassals will also agree to a Law change if they are imprisoned or Terrified of you.

Have your cake and keep it too 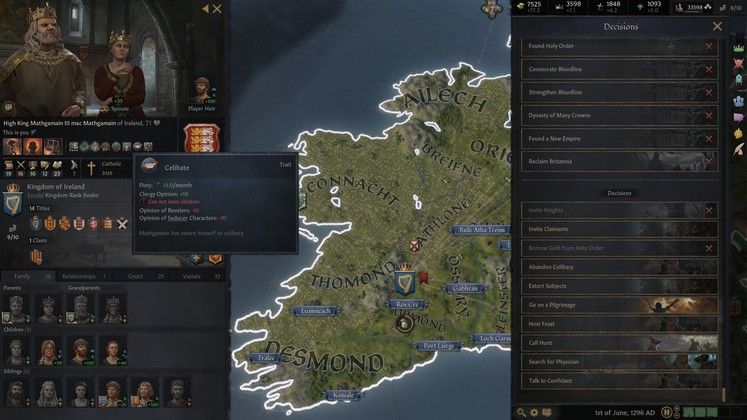 This dire situation may leave you feeling stressed and lead to war after war to reunite your realm, but there are a few things you can do to ensure stability. To start with, you'll want to focus on getting a few points in the Learning Lifestyle. We discuss this in more detail in the Lifestyle and Perk Guide but for the sake of brevity, you want to gain the decision to become celibate. This decision decreases your fertility to zero and makes sure that you don't keep making ticking baby time bombs.

Next up is the Disinherit character option. Using this on all but one of your potential heirs ensures that the titles will all go to a single individual. This is not without its problems though, as not only will your children hate you for it (-75) but it also costs a lot of Renown to do so. Renown can give permanent and powerful buffs to your whole family tree and spending huge amounts will hurt you in the long run. This is why it is best to combine with the Embrace Celibacy decision to make sure you don't have to do it with more than one or two children per generation.

This will still be a major hurdle to building a Legacy so it's a trade off whether you want to proceed with it. For a cheaper and less hostile option, disinheriting the children of your heir costs half as much and they won't hate their father when he takes the throne after you, which is nice.

Either way, if you decide to use this strategy, know that you can also Re-inherit children should the need arise for a fraction of the cost. This doesn't mean you can afford to keep swapping it around, but it is a helpful tactic should your heir die or a disinherited son look more appealing as your next ruler. This also means you can choose whoever you want as an heir without the need for Absolute Crown Authority and the thousand prestige cost. 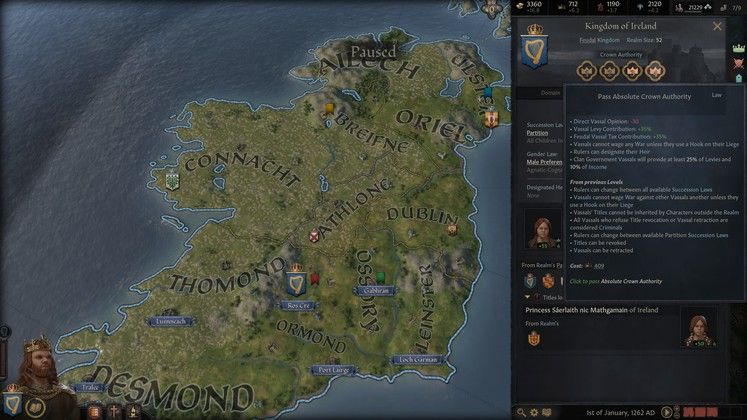 Realm Authority is a simple concept. Vassals want it low, lieges want it high, and tyrants want it absolute. It has four available tiers, with tier three being suitable for most purposes. Getting it to three prevents vassals from warring against each other unless they use a Hook on you. This is extremely important as it makes it much harder for vassals to gain the strength to threaten your position.

The lower levels of authority give you the ability to revoke titles and pass different succession laws, while higher levels also increase taxes and levy contributions. The main advantage of the absolute tier is heir nomination, but this only really comes into play if you have a single heir law, while the main disadvantage is the massive -30 opinion hit with all vassals.

As a side note, if you are Tribal and want to convert to Feudal, you will also need Absolute Authority. 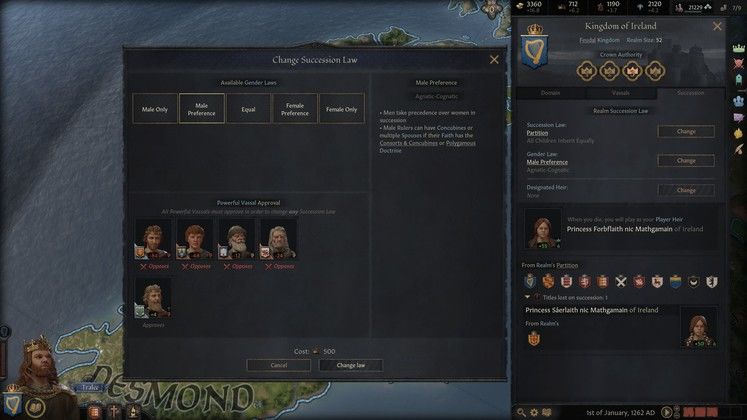 By default, Gender Law is set to Male Preference and is probably where you should leave it, especially if playing Catholic as Religions have their own laws on who can rule. For the most part this means that women can inherit, just so long as there are no eligible men. Changing this to Male Only might be fine, but you could end up losing control of your heir and shifting over to a random cousin.