Aside from Crusader Kings 3 Succession, vassal management is probably the most important aspect of CK3. It's also what you'll be spending most of your time dealing with, and the cause of much of your troubles. Vassals, as every other character in the game, have their own personalities and goals, some of which will conflict with your own.

This guide will talk about the basics of Vassal management and what you can do to keep your realm stable. There are many ways to do this and no single option will see you through every crisis, but Crusader Kings 3 gives you a large toolbox to play with. 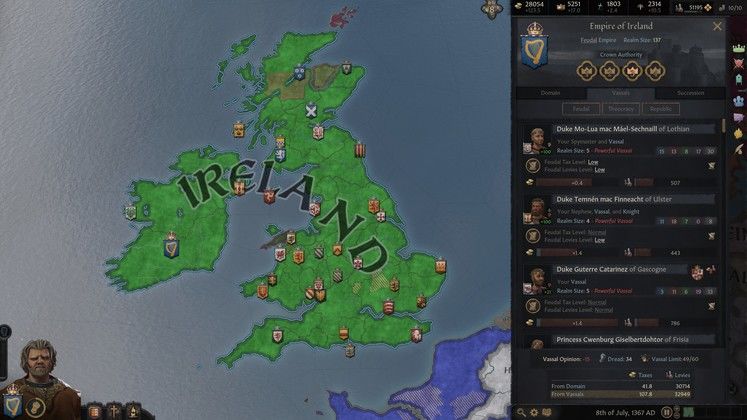 To get the basics out of the way, a Vassal is a landed ruler who swears their allegiance to another character. As a player it is likely you will have at least a few Vassals serving you, but it is also possible for you to be a Vassal to another. This means you can be both a Liege and a Vassal at the same time.

The same is true for your Vassals, as Duchies will be the Liege to the Counties below them - at least until they usurp all the Titles for themselves. All Vassals have an Obligation to provide Taxes and Levies to their Liege, and the amounts vary based on contributions and Laws.

Essentially it comes down to delegation, with you granting characters power over others while you have power over them. The larger you get as a ruler, the more this becomes a requirement as each ruler has a Vassal Limit dependant on their rank. This number only includes Count level Titles or higher, so Cities and Temples inside your Domain don't count towards it. Going over your Limit can stack penalties to Taxes and Levies by 5% per extra Vassal.

Kings and above also have a Duchy Limit of 2. After that they receive a -15 Opinion penalty from their Vassals for each Duchy over the limit. However, a Duchy can have as many Duchies as they want with no penalty from their County Vassals. This means it is possible to remain as a Duchy until you have around 25 total counties under your control - that's 20 Vassals plus whatever your Domain Limit is - which could be a viable strategy before you grow too large. 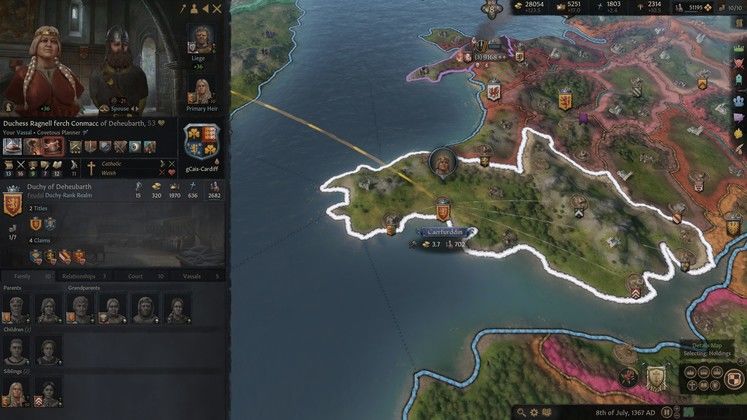 As we mentioned above, Vassals come in all shapes and sizes based on their Title Ranks and they expect to serve their De Jure Liege. This means that a County wants to see a Duchy Title, a Duchy wants to see their De Jure Kingdom, and a Kingdom will want to be a part of the greater Empire. Alas there is an exception to prove the rule, with Duchies willing to directly serve an Empire without an intermediate Kingdom.

Nevertheless, as a player you don't have to run things this way and while it's true that not being their Rightful Liege to your Direct Vassal will hurt their opinion of you and their Contractual contributions, there is an argument to be made for keeping them lowly.

For one, if you hold the higher De Jure title, the penalty is lessened and isn't all that damaging - meaning a Kingdom can hold a County inside its De Jure borders without major problems.

You also learn early that Duchies are almost always the biggest threat to your power. With far more military strength than Counties, Duchies are more likely to push for changes within the Realm, and since they have more power it takes less of them moving against you to send an ultimatum and trigger a civil war.

However, as you get larger, you will need to begin consolidating Vassals into Duchy Titles to stay under your Limit. This isn't a major problem though and with the right management, Duchies are fairly easy to manage - until that perfect storm of hatred and greed causes everything to explode. 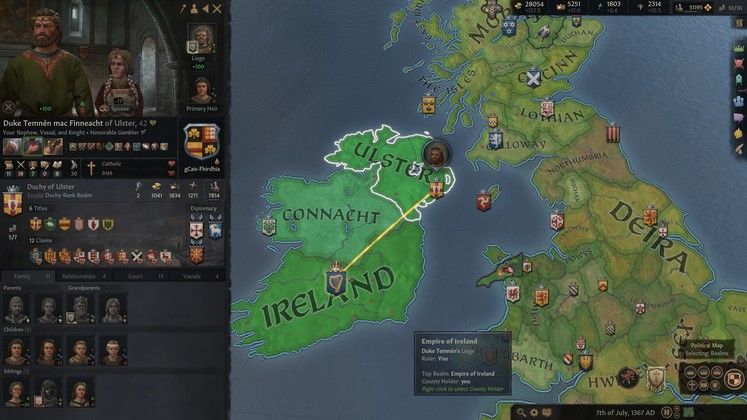 No matter the rank of your Vassals, as long as you have enough, you will always have some considered Powerful (3 as County, 4 as Duchy, 5 as Kingdom or Empire). These Powerful Vassals have additional demands due to their positions in your Realm and are much more difficult to manage than lesser rulers.

You will incur a massive -40 opinion from them if they aren't given a seat on the Council and this alone is often enough to make them dangerous. 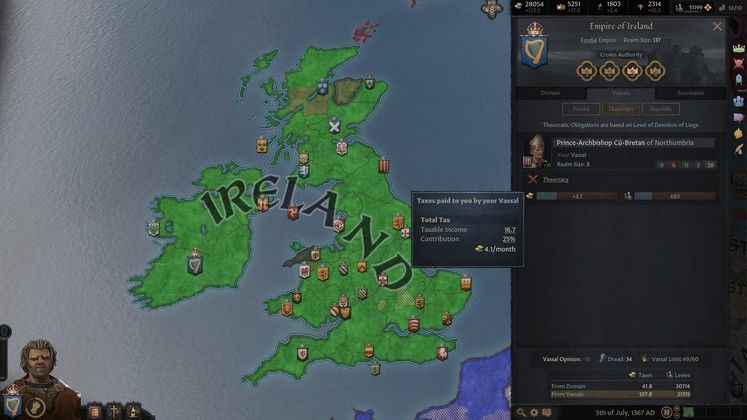 Vassals in Crusader Kings 3 are not just limited to Feudal rulers and your interactions with them along with their Obligations to you vary depending on the type. Most Republican Vassals are inside your Domain, but they can exist as rulers under rare circumstances. The same is true for Theocracies, but if your religion has the Theocratic Doctrine, your Domain Theocracy Vassals will be transferred to the Realm Priest's control.

These numbers, even when unchangeable through Contracts, can be affected by Crown Authority levels and Perks, however, like most bonuses these apply to the current percentage instead of the base number making them fairly irrelevant unless you're min/maxing. The chances are you'll simply gain this bonus through normal play. 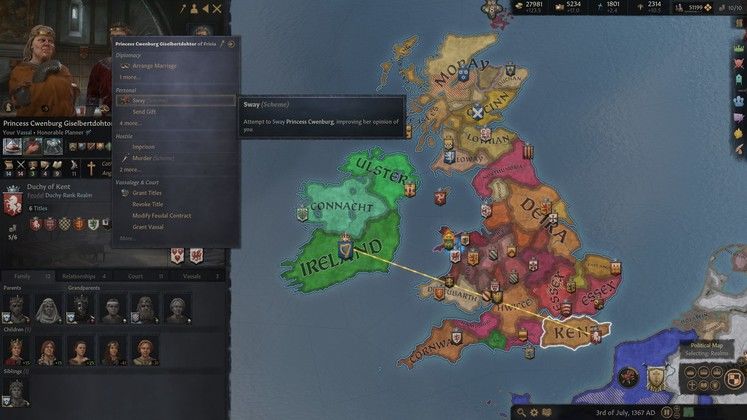 What your Vassals think of you determines a lot of your interactions in Crusader Kings 3. If all is well you'll be able to focus on building and expanding your Realm, but if it's not you'll spend your time dealing with little fires and unruly nobles.

There are many different things that can change the relationship between two characters. Often times it is something you've done, but occasionally it's who you are. There's nothing to do about conflicting Traits but suck it up and try to kill them with kindness… or just kill them.

Luckily, Paradox have blessed us with the means to handle these Vassals in many different ways. If you are looking to make everyone like you, that's possible. Harder to maintain but potentially more fun is the opposite idea, let them hate you but sprinkle on a heavy dose of fear.

If you're looking for friends, the Sway scheme will move even the most hateful Vassals to purring at your feet. You can do this one character at a time and with fairly high chances for success. If you are struggling with this though, there is the Benevolent Intent Perk that gives a nice 30% bonus. Since you're already over in the Diplomacy Lifestyle, check out the Befriend Perk that lets you forge lifelong bonds of friendship, pretty much ensuring they will never rise against you.

What if you have a more serious problem with lots of Vassals eyeing you funny? Well, you can use the Host Feast and Call Hunt decisions every five years. These increase opinion by a little bit for a lot of characters, and this can really help to take the heat off before it boils over. 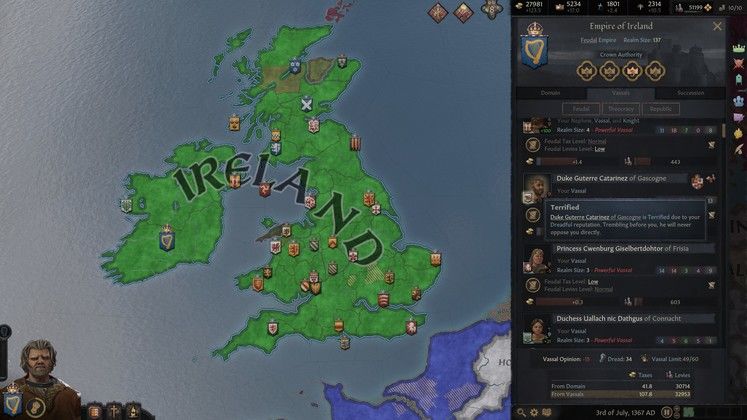 When you've decided that fear is a better motivator, you can make Vassals sit down and shut up by increasing your Dread level. Dread is basically how feared you are and depending on the Vassal's Traits can cause them to become Intimidated or Terrified of you.

Dread can range from 0-100 but will start being effective as a deterrent even at lower values of around 20. It will also seek towards your Natural Dread at 0.5/month. This innate Dread comes from multiple sources such as the Wrathful Trait that increases it by 20 or the Intimidation Focus that increases it by 30.

There are also Perks that affect it in other ways such as Dreadful that ups your gain from Dreadful acts by 30% and a Perk that stops Dread decay altogether, meaning that with very little effort you could remain Forever Infamous. What all these mean is that you can play as a full blown Tyrant, just so long as your Vassals know what will happen to them if they misbehave. 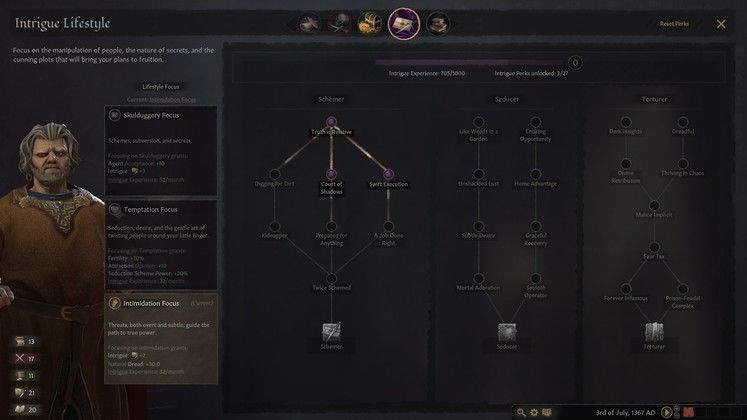 Many different actions cause Dread to rise such as torturing or executing prisoners, or indeed arresting characters without cause. A Dreaded Liege will reduce the chances of Vassals joining Factions or Scheming, be less likely to oppose Law changes, more likely to vote for you, more willing to accept diplomatic Vassalization, and perhaps most importantly, too scared to fight back when you revoke their Titles.

Note: Dread will affect those outside your Realm half as much than those in it, and your indirect Vassals (Vassals of your Vassals) will only feel 70% of the fear as their Liege insulates them somewhat.

For more help with Crusader Kings III, drop by our guides covering troops, knights, and holdings.