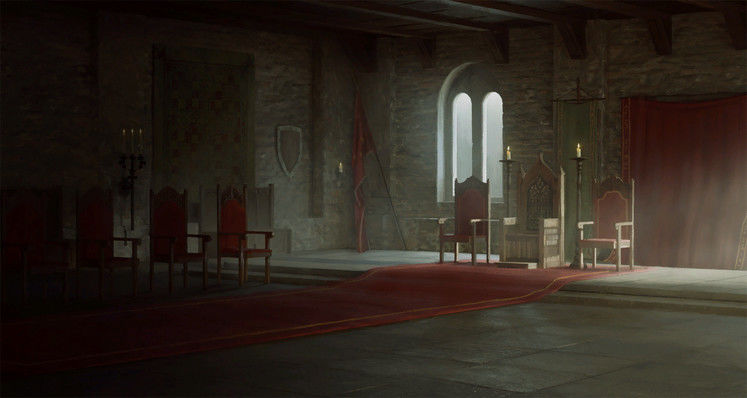 Vassals in Crusader Kings 3 have an Obligation to provide Taxes and Levies to their Liege, and for Feudal rulers the amount varies based on their individual Feudal Contract. These Contracts spell out the terms of service and affect not only what your Vassals have to provide, but also their opinion of you. In this guide we will cover all the different legal mumbo-jumbo of these Contracts and talk about what works best when. 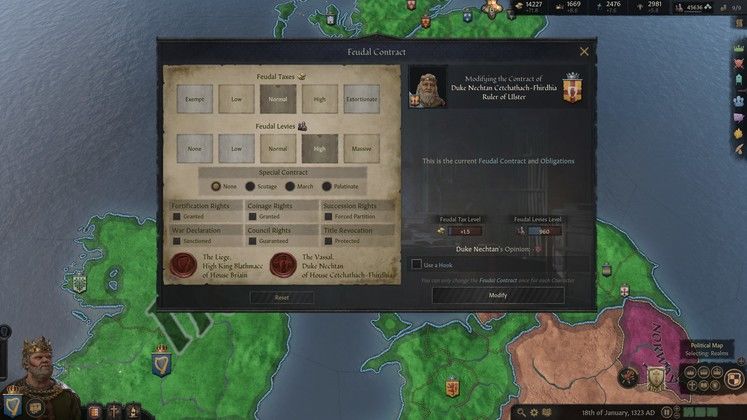 At the start of the game you will only have access to the basic contract which alters Taxes and Levies. These can be moved up or down by one tier per modification of the Contract. Implementing any of the higher obligations will incur both a permanent opinion modifier to the holder of that Title, and a temporary Tyranny penalty to all Vassals in your Realm.

As you are changing the options, you can see the effects on the right hand side of the window which includes the change in Tax and Levy contributions but also lists the opinion modifier. Demand too much and you'll see their opinion fall, and that's if you can even get them to agree to the new terms at all.

You can only demand one Tyrannical change at a time, which means an increase of either Taxes or Levies but not both. This can be countered by using a Hook on the Vassal to allow for both to be raised together. This Tyranny hit can also be avoided altogether by lowering the other obligation in compensation. In this way you can maximise your Levies or Taxes depending on your needs.

Note: Hooks can also be used when the Vassal doesn't want to accept the change in Contract as well and the game will flag up the opportunity for you to use a Hook this way when one becomes available. 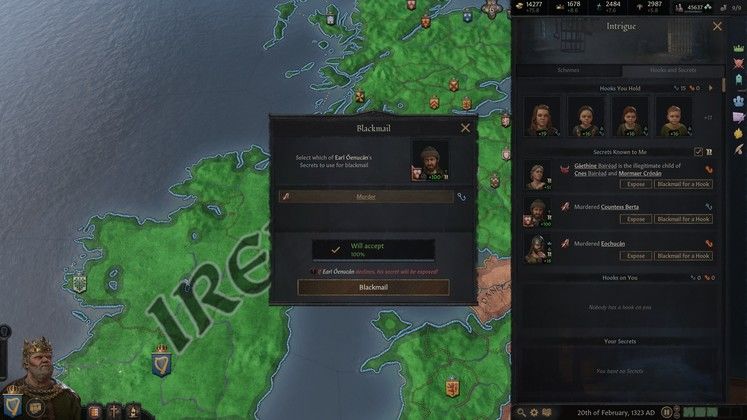 The opinion modifiers for upping your demands are substantially more than for lowering, with it increasing to -15 then -25, and only decreasing to +5 then +10. This means even with one set to High and the other set to None/Exempt, you will still suffer an opinion hit. Especially true in the early game, increasing Vassal obligations is rarely worth it, as a few percent more of a tiny amount is still a tiny amount, but a flat opinion hit can still hurt.

As your Feudal Vassals have independent contracts concerning their contributions towards you, it can become a bit of a chore to handle them all individually. Fortunately they all begin at a standard which is where you'll be leaving them for the most part. That said, you may want to tweak some under exceptional circumstances.

By the time Taxes reach a high enough point for them to be worth increasing, you'll already have enough gold to do what you need to, making either leaving it alone or reducing it a no-brainer. Levies are another matter though, and while we're not talking about thousands of men, a powerful Duke could contribute an extra few hundred men by setting it on high.

Whether or not that is worth the -15 opinion penalty is another question, and depends on your circumstances at the time. Don't be too hasty changing your Contracts though, as each can only be changed once in that Vassal's lifetime, meaning you may be stuck with it for decades. 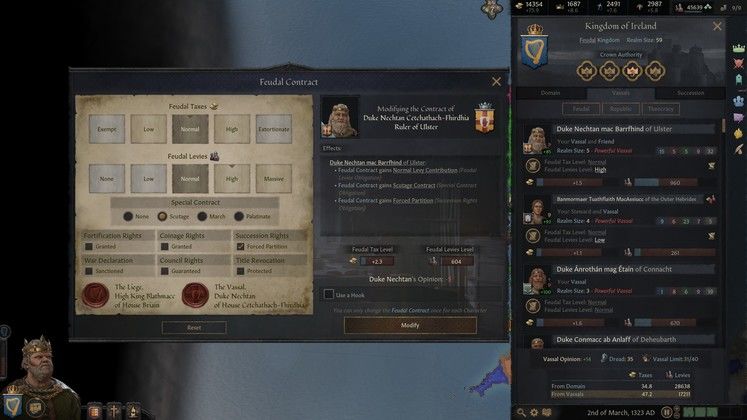 As you gain more Innovations, you will slowly unlock the 'fine-print' options. There are six of these in total, each adding special rules to the Contract, and any number of these can be used together in combination.

In these options, the main one that jumps out as a benefit to the Liege would be Succession Rights. This helps curb the power of Duchies who will inevitably retract the Vassalage from their own Vassals, consolidating their own personal power to more closely match your own. Duchies also tend to expand into neighbouring lands more often than Baronies through either war or marriage, so anything to help you keep them under control is a good thing. For only -5 opinion, it is well worth having. 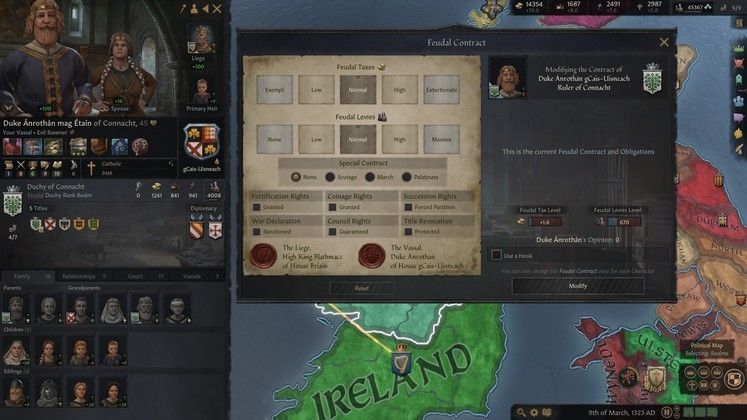 On top of these options, each Vassal of Duchy or above can be given a single role through the form of a Special Contract. By default this is set to none but these roles can be far more worthwhile than the Tax and Levy contributions, although they do have synergy with them. Don't take the percentages as written, as the final numbers tend to be a lot more reasonable than what it sounds like. For example, if the taxes are increased by 50% as with Scutage, that is 50% of the 11% you would get from Normal Taxes, making it 16.5% Tax.

As with the Contract Rights, most of these help the Vassal more than their Liege, but they can be useful under certain circumstances. March is good if you are looking for your Vassals to wage wars on your behalf and works well with higher Levies.

Scutage on the other hand works best for Tax income. While at first glance this may appear to be a bum trade, at Normal Taxes, our smallish example Duchy ends up paying an extra 0.8 gold/month at the cost of 300 Levies. To put that in perspective, we could use that gold to pay the unraised costs of 600 archers Men-at-Arms, any one solider of which is worth many times more in the field than a peasant Levy. It also comes with the added advantage that they count towards your personal power which dissuades your Vassals from making demands against you. 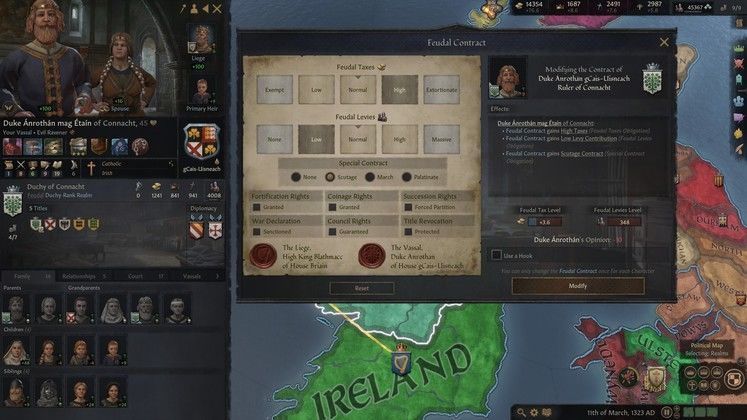 Also remember that increasing the Vassal's base contribution will increase the benefits of these even further, and putting our example Duke into a High Tax bracket at the same time increases the gain from 0.8 to 2 extra gold every month. Due to the already massive hit to the Levy percentage, we could also reduce his Levy contribution to Low, to bring us to an opinion hit of only -10 with very little further effect on the Levies he will provide us, as well as negating the Tyranny hit at the same time.

If you're looking for more Crusader Kings 3 guides, you might want to check out our Console Commands and Cheats page, as well as how to effectively use Knights.