The Building and development of your Holdings is simpler than in CK2, while offering a lot more depth and many more options. In this guide we're only going to look at castle buildings as you won't normally find yourself in control of anything else in Crusader Kings 3.

To start with, the basics are fairly simple. Each County has provinces that can be used to build a Holding. Holdings can be Castles, Cities, or Temples. Each Holding gets a number of building slots with the De Jure County capital receiving four, and everywhere else has three. 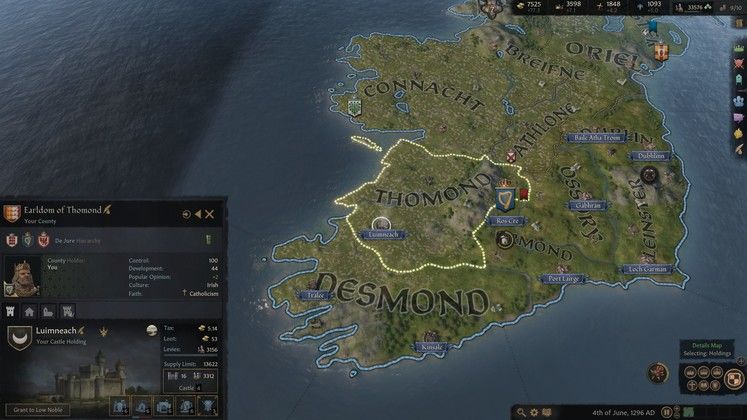 There is also the Holding itself that can be upgraded which both increases bonuses for that type, and acts as a prerequisite for building upgrades in the County. For the Castle, this means you see a small Tax increase, some Fortification levels, moderate Levies, and a sizable Garrison.

Some buildings are tied to terrain types, such as the Trade Port that requires a coastal border but they are mostly self explanatory and for the most part, buildings can affect the Holding, the County, or the Realm. There are exceptions to this we talk about later but for now those are the main three. Note that these bonuses all appear to stack additively even across multiple versions of the same building where applicable. 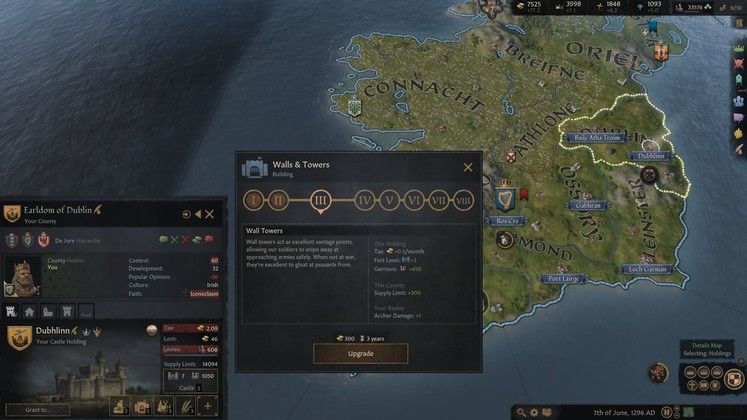 What you choose will be dependent on what you need most at the time, and all buildings can be replaced at a later date, although you do lose the initial investment. A good starting point may be to build a few Defender Advantage buildings such as the Outpost and Bailey. When fighting a defence battle these roll modifiers can turn defeat into victory, but if you were to only choose one, the Bailey offers much better benefits and remains viable well into late game. Coincidentally some of these also happen to be the cheapest options which make them even better choices for the early game.

Your next step should be increasing your personal Levies. As with most things, it comes down to numbers and being able to marshal even an extra few hundred men early game makes a huge difference in who you can defeat. Many buildings that increase your Levy also offer Realm-wide bonuses to the Men-at-Arms units that will be your heavy hitters.

Take Military Camps for example. These will add large numbers to your Levy while also boosting the damage and toughness of archers and skirmishers which make up the cheaper of your Men-at-Arms and as such will be the early to mid game units of choice. As we mentioned above, you can stack bonuses so if you have two buildings that buff archers, both will be counted. This also applies to other held Counties where you can have those same two buildings and receive the same buff a second time. 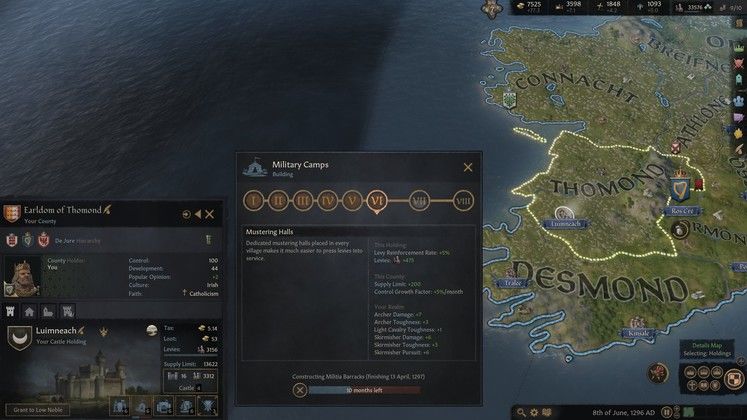 The third priority, and probably worth dropping some Defender Advantage for once your position is more secure is Tax. All rulers need to tax their people and gold is hugely valuable, especially in times of war when your raised armies suddenly suck you into a black hole of debt which cripples your fighting ability.

Tax buildings often have the side effect of increased County Growth, which at low levels doesn't make much difference, but by 50/100 Development can net you an extra 25% Tax and Levy Size for that Holding. Overall development across your Culture Counties also determines how fast you can get new Innovations (technology) so its worth spending time getting.

One side note for Development is that County Capital terrain matters. If you start on wetlands, you'll suffer -25% Growth which exceeds multiple early game Growth buildings. Later on you can overcome that percentage, but it might be worth building yourself a second Castle if you have the empty province and moving your Realm Capital there.