Doom Eternal Cultist Base Secrets - All the Question Mark Items 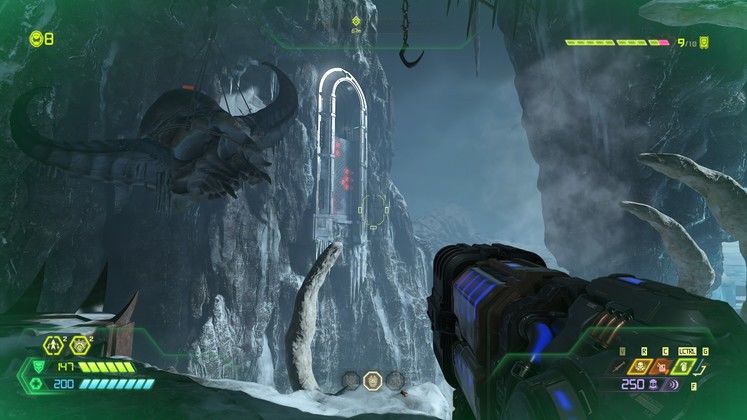 Doom Eternal's Cultist Base level is where demons, snow and secrets meet. But while you won't have that much trouble running into the first two things, secrets are often found outside of the critical path.

Here are the locations of all the secrets found throughout Doom Eternal's Cultist Base level. 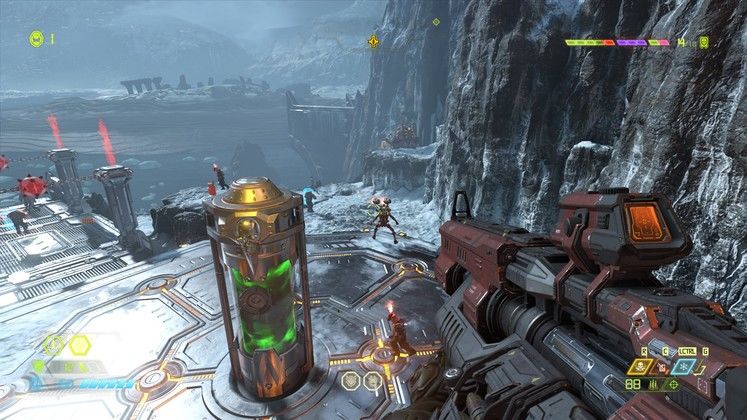 Not that far into the level, you'll reach an area with a large suspended demon skull, a bounce pad and sticky walls. Get to the edge of the massive spine sticking out of the ground, turn to the right and make your way to the jump pad.

Use it to reach the first sticky wall. Jump to the sticky wall with the red mines on the right and climb up. Instead of going forward, turn around and jump towards the right. Dash to get on top of the large suspended demon skull and unlock the first Cultist Base secret: the Gargoyle Toy.

This one's a bit different, as the Sentinel Battery itself isn't the secret. Instead, we're talking about the punchable button required to reach the battery.

From the entrance to the Cultist Base's first area with multiple demons fighting each other, jump down and to the right. In front of you, there should be a ledge that you can reach by jumping right. Once you've reached it, move forward and punch the breakable vent.

Punch the green button and you'll see a gate opening. You can now access the jump pad on the lowest level of the area, right in the center. This very jump pad allows you to jump high enough to get the Sentinel Battery that's otherwise unreachable.

After the first Modbot that's on the path to your main objective, you'll descend through a frozen hallway. Before reaching the door, look up and to the left for a cracked frozen wall. Jump to it, punch it, drop down and you'll find yourself a secret Praetor Suit Point.

Progress towards the main objective until you get your Super Shotgun. Complete the first fight during which you can use it. In the center of the room, there should be a structure with two monkey bars and a question mark item in the center.

Use one monkey bar to gain height, jump and dash towards the question mark and you'll have found Doom Eternal's IDDQD Cheat Code.

As you move towards the main objective, you'll have to navigate a corridor with chained axes that are very eager to split the Doom Slayer in half.

Take your time to get the rhythm right, start moving past them and, between the second and third axe, look for a breakable vent on the right. The Soldier Toy waits just beyond it.

After the section in which you must climb large towers using sticky walls, you'll walk up to massive spiked platforms colliding with each other. Before doing your best to quickly dash past them, look to the right for a room with an armor drop and two red land mines.

Enter it and you should also spot a breakable wall. Punch it and you'll find one Cultist Base Secret Encounter.

You'll spot the question mark behind a gate in the flesh-covered room with the platforms of spikes repeatedly crushing the floor. Walk to the end of the room and look to the left. Wait for the spikes to fall, then climb on top of the platform.

Quickly turn to the left and dash towards the stuck spike platform. Drop down to get your hands on the Doom II - Into Sand's City Album.

These are all the secrets you can find in Doom Eternal's Cultist Base level. For more help, check out our guides on Rune locations and Taras Nabad secrets.