It's nearly here, and Chris Capel gets a more thorough play on Techland's Dead Island successor

Once upon a time there was a game called Dead Island. It was made by Techland, those guys behind the excellent Call of Juarez games, and it was an ambitious free-roaming co-operative zombie RPG. Some might say too ambitious, since it was riddled with bugs, not much fun in single-player and a little repetitious in design. After making a swift follow-up in Riptide the licence passed to Deep Silver, who assigned Dead Island 2 to Yager and will be out sometime next year, whereas Techland began crafting their own similar-but-different follow-up which is due in January 2015. I think this is the first time I’ve seen a spiritual successor and a sequel to a franchise turn up in the same year.

It's nearly here, and Chris Capel gets a more thorough play on Techland's Dead Island successor.

For those of you keeping count (well done you) this is actually my second hands-on with Dying Light. However that first time was just a short play through where I was guided by the game’s level designer - this time I have now played the entire beginning of Dying Light and thoroughly explored the opening city slums of Harran. While it did feel more than a little like Dead Island it was different enough for me to really get into it. I completed Dead Island but barely touched Riptide because I was so tired of the gameplay but Dying Light brought back my attention.

You play a man named Kyle Crane, a government agent on some mysterious mission that was only teased during my few hours with the game. After literally dropping in to the city of Harran you’re beset by both bandits and the undead, as due to some unknown reason the zombie apocalypse has happened and you’re now right in the thick of the quarantine zone. After being rescued by a group of survivors holed up in an apartment building there are introductions, a short tutorial, a lot of warnings and, finally, a request for help. You volunteer as a runner to get out in the city and make things better… well, and make your government bosses happy too. 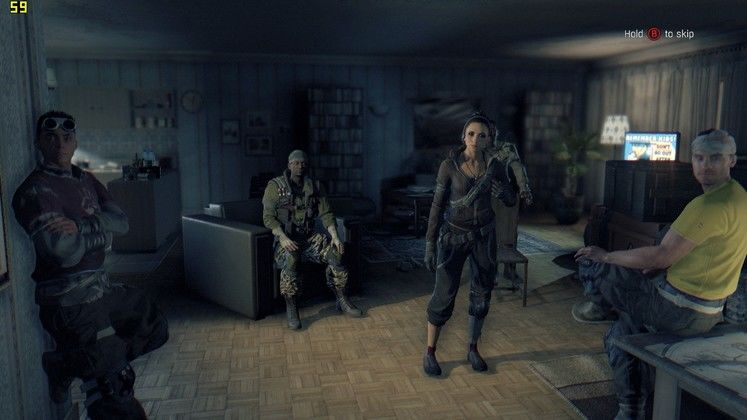 The main gameplay of Dying Light is, on the surface at least, very similar to Dead Island. You explore, you go on simple missions, you kill or avoid zombies who are actually pretty tough, and you scavenge for all sorts of insane items that you can use to craft objects like firecrackers, which you can use to lure zombies where you want them to go, and upgrade your character in the three skill lines of Agility, Power, and Survival. Zombies are everywhere and have various mixes of strength, speeds, ones with special clothing like armour vests and hazmat suits, and stronger bastards like the big hulking brutes who swing giant hammers. Yes, there are bikini zombies too. There are also non-dead human enemies, such as looters and bandits, and it’s lots of fun to lead them into a pack of zombies. Combat’s generally more fun than Dead Island, with explosives and the ability to kick zombies into spike traps, but so far it does feel similar.

There are two big areas where it differs from its spiritual predecessor however, and the first is the much-advertised free-running. This definitely has a Mirror’s Edge feel to it, as opposed to Assassin’s Creed. You can’t climb up every surface to the top of a building, but if it looks like you can climb it or grab hold you can. You can even shimmy up telephone poles, although sadly not palm trees. It’s hard to convey in words just how satisfying and fun it is just to run and jump from rooftop to rooftop. The video probably helps but it’s nothing compared to taking control and just parkouring around Harran. Only an extended playthrough will tell if it becomes repetitious over time but I personally loved the few hours I spent desperately scrabbling up on to tin roofs to escape the zombie hordes below. If you’re tired of zombie games definitely give Dying Light a look when it comes out, the zombies are actually the least interesting thing about it. 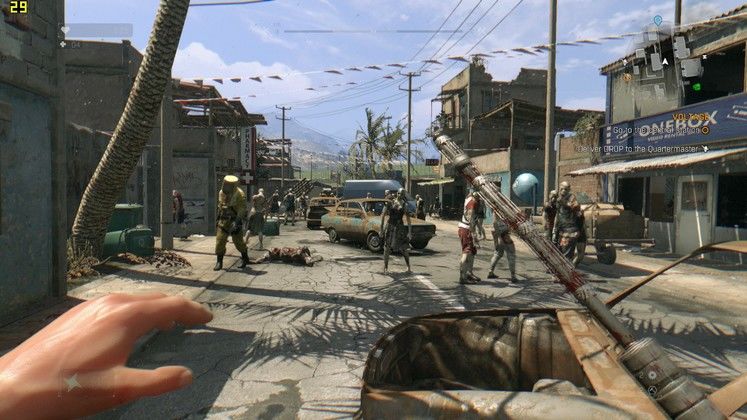 That is, until night falls and the other big difference from Dead Island comes into play. While in daylight apart from the free-running Dying Light does mostly feel like Techland’s first zombie game, as soon as darkness sets in the entire game changes. The zombies are no longer slow shamblers; they’re quick, they’re powerful, they can sense you and they can f***ing climb and jump after you. What was a free-running action game suddenly becomes a tense survival horror stealth game like Alien: Isolation, only with loads of the bastards out to get you. If one catches sight of you, you better hide, spring some traps, chuck some distractions, or just run, Forrest, run. At the start of the game the night-time part is nearly impossible to get through without dying - luckily there’s not much of a penalty on that at the moment, as I did it a lot.

The map is quite sizeable, and it’s only the opening area of the game so Dying Light should be pretty damn big in its final version. Hopefully the other areas will diversify themselves a bit as I can’t imagine 30 hours of free-running around apocalyptic slums. There are random encounters to keep things interesting, like survivors in need of help or air drops to seize, and safe zones to liberate, but of course the missions will be your main focus other than surviving. The missions are fairly interesting and brought in well, and most importantly are even amusing now and again. One mission I particularly loved was getting a video and some chocolates for a strange man named Gazi’s supposedly dead mother, so when I finally got in to his apartment I was expecting a Norman Bates Psycho-style scenario with her corpse on the sofa but instead Gazi had just piled a load of sandbags up and stuck a bucket with a smiley face on top for a head. And then he told me to stop bothering them while they watched their movie.

In case you can’t tell I was playing the PC version of Dying Light. I’ll forgive the confusion since mouse and keyboard controls aren’t fully implemented yet so I had to play the game with my Xbox joypad, and the controls definitely take a bit of getting used to. And yes, there are still a few things left to do in the game before release. There are a few very silly bugs including one that forced me to restart, button prompts are a bit small, and it’s occasionally hard to work out what you’re supposed to be doing. Hopefully Techland have time before the game’s release next month to squash all the unfinished bits remaining, especially since Dead Island was a bit of a nightmare for them in this regard. Nevertheless what I really wanted to say about the PC version was that with all the settings turned up, as you can see here, it’s utterly incredible to look at. While it made my PC hum something awful the scenes on offer were sometimes breathtaking to behold, and although the zombie hordes never reached Dead Rising 3 levels they could get pretty sizeable. 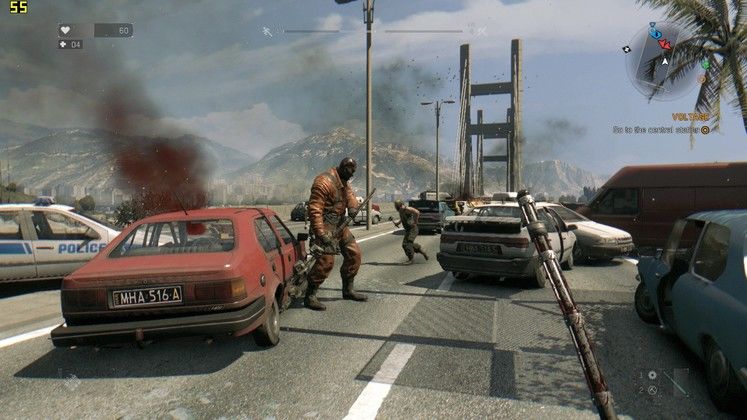 Looters versus giant hulking zombie with a hammer. Who will win? Answer - me, after I kick the looter in the back.

I was looking forward to Dying Light before but I must admit I was concerned about whether I’d enjoy it in single-player since Dead Island really did skew towards co-op and lost my interest in its sequel. Fortunately my few hours with the game have put my concerns to rest and I’m back to definitely buying it when it comes out, even if I don’t touch the multiplayer which will undoubtedly be a blast (even though I didn’t get to try it out this time around). If you’ve been left jaded by zombie games and Dead Island Riptide left you cold I definitely recommend giving Dying Light a go, it might reignite that passion for zombie smashing with its big dollop of free-running and a tablespoonful of night terrors. Now if you’ll excuse me, I’m going to sleep with the light on.

Dying Light is currently due out January 27th 2015, although that could certainly slip and I’m taking bets on whether it does, and will be new-gen only so PC, Xbox One and PS4.