When there’s no more room in hell, Dead Island will get parkour

Dead Island was a great idea in search of a great game. An open world first-person zombie apocalypse co-op melee/shooter where the zombies are tough and it’s just as fun to play single-player as online? Sign me up! Trouble is it ended up really repetitive, not much fun in single-player, and buggy as hell. In short, it did not deserve that Game of the Year Edition. This year we have two attempts to rectify that mistake. Dead Island 2 comes out later in the year and has a new developer in the form of Yager, whereas Dead Island’s developer Techland (who also made the mostly-excellent Call of Juarez series don’t forget) have started a new franchise with Dying Light. Let’s hope we get that great game at last.

When there’s no more room in hell, Dead Island will get parkour.

The story of Dying Light is rather straightforward (it has to be) but has a few interesting wrinkles later on. Basically an unknown infection has swept through the city of Harran and the whole place has been quarantined. That’s left the survivors struggling to stay alive in a city of the living dead, with only air drops of a preventative medicine called Antizin keeping the bitten ones from turning into zombies. Most people choose to stay in groups, such as the one you ally yourself with at the start lead by a man called Brecken and the vicious gang of thugs lead by the untrustworthy Rais. And you? You’re a government agent named Kyle Crane who’s been dropped into Harran to find some mysterious file that his sinister employers want very, very badly. Things don’t go so well, in case you were wondering.

Keeping things simple, Dying Light is very like a much improved Dead Island. If you hated the idea and execution of Techland’s last open-world zombie game then you might as well give this a miss. You’re still exploring, scavenging, beating up tough zombies, avoiding tougher zombies that really feel like they’ve been torn from Left 4 Dead. Dying Light just feels very like Dead Island. Fortunately, as I said, it is improved, although not entirely to perfection. 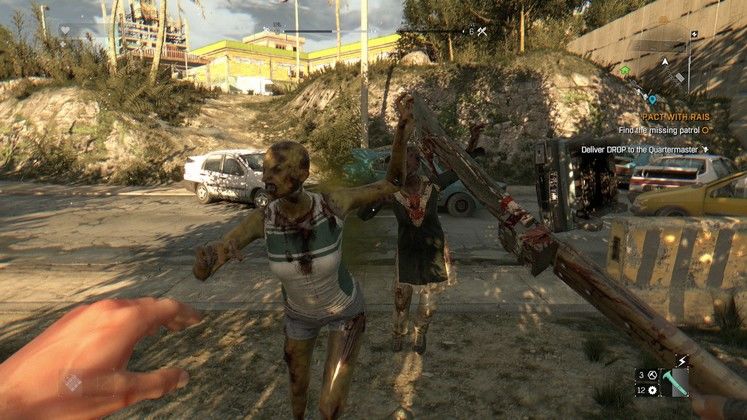 Looks like something more interesting caught their attention. Even the undead don't find me attractive. Sniff

Harran is a much more interesting place than Banoi, for a start. There’s something in every corner, enough variety in the layout so things don’t get too samey and you can eventually start recognising where you are while running past at top speed, and the characters are much more entertaining. While the story is serious Techland aren’t afraid have to fun now and again, as the insane and colourful characters you meet prove. You can become really attached to them, but this is a zombie survival game so don’t expect them all to survive. It’s a little disappointing that there are only two big zones, the Slums and the better looking Old Town, but they’re both massive so you’ll be exploring Dying Light for a long time. It took me 15 hours just to reach Old Town for example.

It’d be awful though if there wasn’t anything to do in all this space, so it’s a relief that missions are so plentiful. There are the big, epic, main missions of course, which is both where new gameplay elements get introduced and where you meet fearsome new zombie types for the first time. They’re all pretty great, although the one with the Bolter zombie (who runs away when he sees you) did try my patience a little bit. There are loads of side quests which you pick up from people and billboards in safe areas around Harran, and while a fair number of these amount to little more than fetch quests the way they’re dressed up stop them from being boring. Finally as you wander around the city random events pop up on your map, such as aiding survivors from zombie attacks. There really is a lot to do, and while the map isn’t as overloaded with side stuff as Ubisoft games like Far Cry 4 or Assassin’s Creed Unity there’s always plenty of things to tempt you away from the main mission path.

Of course this constant back-and-forth with quests would get boring if getting around wasn’t easy, and cleverly Techland have turned this problem into their central gimmick. If you know anything about Dying Light you probably know that it’s been compared to Mirror’s Edge in that there is a heavy focus on first-person free-running. And it is a lot of fun. Jumping from rooftop to rooftop, clambering over every surface, sliding about, it all gives Dying Light a wonderful sense of motion that remains entertaining throughout the game. It’s not perfect admittedly - getting down from things is tricky and often meant a fall to my death and me wanting to throw my computer out the window. Plus Far Cry 4 has a cool “vaulting” over walls move that I wish had been implemented here for pure showing-off purposes. Overall though it’s fun to free-run around Harran, but I admit it does get a little tiresome after 10 plus hours in the same area. 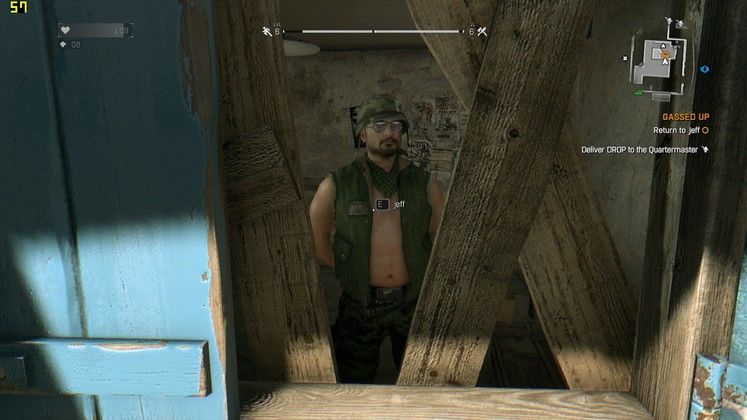 Ah, Commander Jeff. I'd join his army any day. Until he blows himself up

Of course while exploration and parkour is half the game the other half is combat. For the vast majority of the game this’ll be melee-focused. This part is almost exactly like Dead Island right down to having tough zombies that take a fair few hits to bring down, but it does get progressively faster to bring them down as you get through the game and find better weapons. You can also upgrade every melee weapon in the game with add-ons that you craft such as an electricity mod, which really give you an edge in battle - not to mention making you want to hang on to some weapons because they look cool even though you’ve got a dozen better ones in your inventory. Guns don’t really appear until nearly halfway through the main campaign and you don’t really want to use them on the streets since they attract the quicker Viral types of undead, but occasionally a rifle becomes a necessity when up against similarly-armed human opponents in the latter half of Dying Light.

The final big change from Dead Island is the Night. Once the sun goes down the Virals who are such a nuisance in day-time become replaced by the utterly lethal and near indestructible Volatiles. Make too much noise and they’ll pursue you across the entire map, and most likely catch you and kill you unless you get to a Safe Zone in time. The night turns Dying Light into a slower stealth game, one where you rely on Crane’s “hunter sense” to watch the Volatiles and UV lights to stun them if they spot you. While you earn ability points much quicker at night the risks are much greater, since you lose those points if you die. Points are used to upgrade your Skills in three categories, which are Survivor (scavenging), Agility (getting around), and Power (combat). Choose your upgrades carefully, as some skills are more useful than others it seems.

Of course one of the big attractions with Dead Island was the co-op multiplayer, which fortunately is back in Dying Light and has been tweaked to make it more interesting. You can join a game or have anyone join you at any time, at which time you can start either doing missions together or going your own way if you so choose. As you play little challenges show up, from “kill more zombies than the other player” to “get to this location faster”, which are optional but the winner gets bonus points. It adds a little bit of friendly competition to the co-op and is quite welcome. The other more competitive multiplayer mode is ‘Be The Zombie’, where there’s a mix of humans vs human-controlled Night Hunters. This can be quite fun, but only in groups - in 1v1 it gets boring in two deaths. 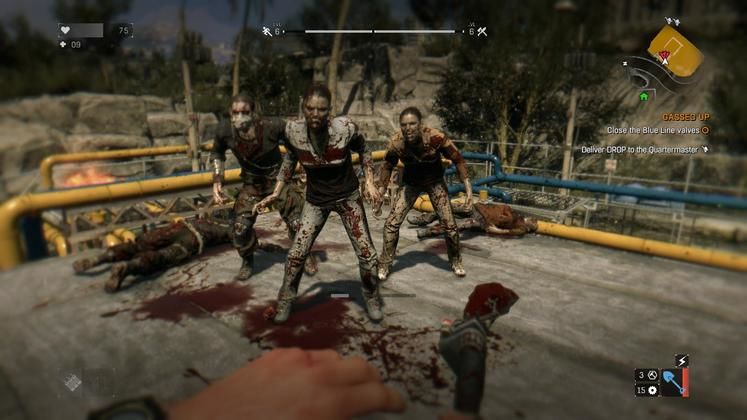 Virals. Quick and clever. I hate these guys. But wait until nightfall, and you'll hate them even more

Graphically Dying Light is pretty lovely, with lots of detail everywhere and good believable design, but I admit I’m not a fan with how washed-out and brown everything looks. Dead Island was much more colourful, whereas I was hoping this new generation would see the belief that “good graphics” equals “brown” get cast onto the scrapheap. Still, I appreciate the detail at least. But this comes at a cost: Dying Light runs choppily on many PCs. I tried to stream the game last week and it ran so poorly I had to abandon it. Techland continue to patch the game but things are pretty bad right now, although the game’s playable for most right now. Well, apart from the odd major bug here and there.

Dying Light is a very impressive game that’s clearly had a lot of care and attention put into it. Harran is great to explore with the mostly well-implemented free-running and killing zombies never gets old, especially with the upgrades you pick up and the new enemies introduced throughout the campaign. The online portions are neat and it’s worth playing co-op as it keeps the game interesting. Basically the only real thing holding it back is the unnerving feeling that it’s just Dead Island with some excellent new ideas, and if you’re purely playing single-player you may well get tired of it before the credits roll. Graphically the game is impressive but things are pretty washed-out and brown, and on PC it’s tricky to keep a good frame-rate. Nevertheless the negatives are mostly minor or should be fixed (either by Techland or the community), and unlike its predecessor Dying Light is definitely a zombie survival game that’s worth the wait. It might even deserve a Game of the Year Edition this time.

The strange and interesting residents of Harran, including the guy who thinks he’s a werewolf and Jeff, who lives in a Fallout-style “Republic of Jeff”.