Upset that Rise of the Tomb Raider is a timed Xbox exclusive? This might be even better

Goddammit does Microsoft suck, and this is from someone who doesn’t have any Sony consoles sitting next to his TV. Tomb Raider: The Gritty Reboot was an excellent game but hardly a system seller, but Microsoft still threw Square-Enix a few hundred bjillion dollars to keep sequel Rise of the Tomb Raider Rises temporarily exclusive to Xbox One so they can sell 2-3 more consoles before Christmas. At this point in time if I was given an Xbox One for free I’d sell it and get a Wii U instead, so I think I can wait until Very-Early 2015 to get the PC version. Besides, Lara Croft and the Temple of Osiris is out in December on all current-gen platforms and I’m actually more excited about that anyway.

In case you missed it, in Summer 2010 while everyone was being sniffy about the upcoming reboot Lara Croft and the Guardian of Light was released. Instead of the usual third-person action/adventure it was an arcade-y twin-stick isometric co-op puzzle-shooter adventure, and it was fantastic. Even though the reboot proved to be great too fans have still been clamouring for a sequel to Guardian of Light, and finally Square Enix relented and revealed Lara Croft and the Temple of Osiris at E3 this year. I got to play it at a recent preview event to see how it’s shaping up. Well, as it happens. 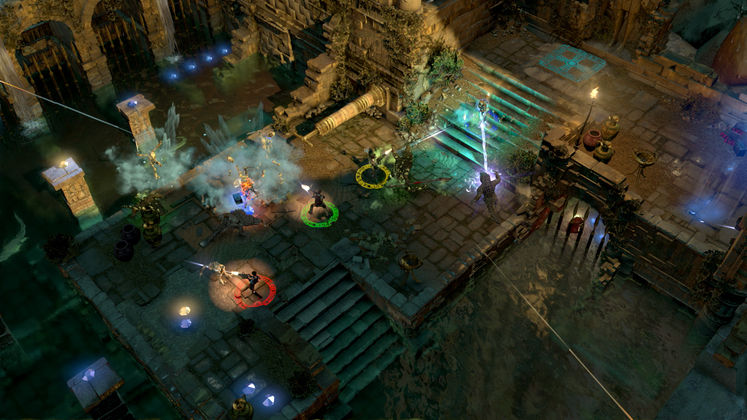 While Lara and Carter shoot regular bullets Isis and Horus have these lovely laser beams instead.

If you’re concerned about the story, I will tell it. Returning to classic Egyptian tomb raiding, Lara Croft crosses paths with rival adventurer Carter Bell (Uncharted’s Nathan Drake, except black) and together they accidentally unleash the ancient god Set, lord of storms, the desert, violence and, er, foreigners (seriously, UKIP love this guy). They also release the god-in-human-forms Horus and Isis who want to help the two mere mortals in stopping Set before he can enslave the world. But not foreigners, he likes them.

The big new deal in Temple of Osiris is that (if you’ve been counting characters) there’s four player co-op now as opposed to two as seen in Lara’s last arcade title, but most importantly Crystal Dynamics hasn’t just thrown in those two extra characters. I joined forces with two other gamers in one of the opening levels of the game. I played Lady Lara, and my two companions took on Isis and Carter. I don’t believe the game requires co-op at all times LEGO-style, but I hope not since the single-player in Guardian of Light was excellent and completely different to the game with a co-op partner. It wasn’t just a case of having more fun with two people, the game actually changed to force players to co-operate to get through areas that you could normally accomplish alone. 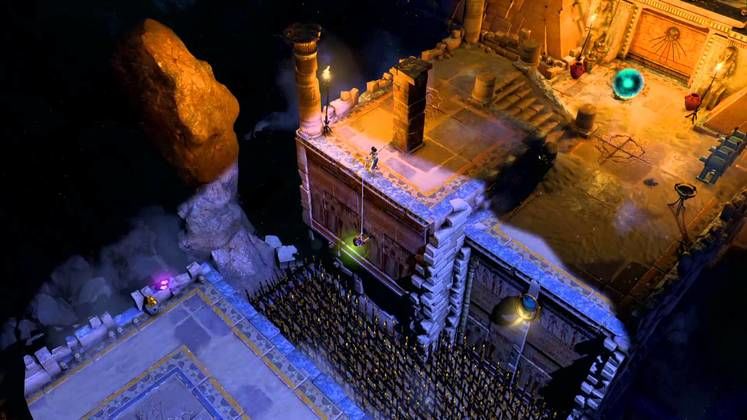 You have to really trust your partner in Temple of Osiris. Or you can be a dick and let them fall into the spikes, whatever.

The same thing is true of Temple of Osiris, and has even been improved. The two adventurers, Lara and Carter, have bombs and grappling hooks they can use to swing over gaps and, most importantly, help others over too. The two gods, Isis and Horus, instead have a shield that can be stepped on to reach higher platforms and the ability to activate magical machinery. Since all players have to be on-screen to continue you have to, say, toss your grappling hook down to allow one of the gods to climb up it. Of course it’s important to note that as per all great co-op games the ability to screw over your partners is alive and well here. Besides simply stealing loot or kills as Lara or Carter you have to hold a button to create a rope over a spike pit that someone else can walk on, and of course you can let the button go when the other player is directly over the pit.

We only got to play one level but already I’m impressed with the design. There were plenty of traps and a variety of enemies to face, like scorpions and Egyptian-style demons. There were simple puzzles that more often than not required more than one player to accomplish, such as one moment in a diamond-shaped room where we all had to stand on pressure pads and shoot a golden eye in turn as it rose out of the floor (and shot at us of course). This one’s actually a good example (well done Chris) of how the game actually caters to how many players there are, as I noticed there were as many pressure pads as there were players playing. This changed the next time when there were four players, so the levels are indeed customised for different numbers of players. Which is pretty cool, I think you’ll agree.

Towards the end of the level after a bit of “I will rule the world bwa ha ha haa” chatter from the dog-headed Set we eventually got caught up with by Ammet, the giant hairy crocodile that had been shadowing us and popping up in the level like a Titan-sized Where’s Wally (or Waldo for our American readers). Cue chase sequence, which was actually pretty damn fun. Walkways crumbled beneath us, we had to duck and jump over spikes, avoiding archers all while running away from the angry Ammet. It was okay if one or two of us fell, but we all did the first time and had to try again. And which we succeeded finally, swinging to victory in the nick of time. 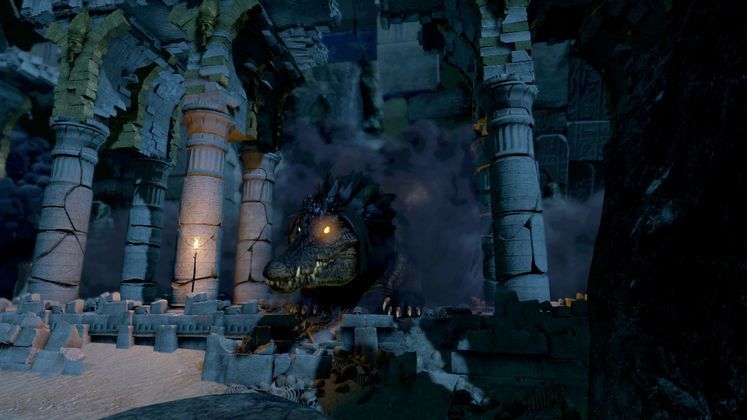 The massive Ammet. And you thought regular-sized crocs were buggers.

It was only a short play but after utterly loving Guardian of Light I can tell that Crystal Dynamics are pulling out all the stops to make Temple of Osiris even better. I love how the levels change depending on how many players there are and who’s playing what, so you won’t get stranded if two players play and both choose grapple-hook adventurers and no one takes the Egyptian gods with their magic powers. Who needs teenage origin story Lara Croft anyway? Well, apart from Xbox One owners and everyone else after Christmas I suppose, but in the meantime this is a hugely compelling (and cheaper) alternative.

Lara Croft and the Temple of Osiris is out 9th December and will be available on PC, PS4 and Xbox One.

Most Anticipated Feature/Element: The single-player actually, and seeing how it plays compared to co-op. 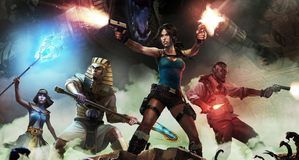 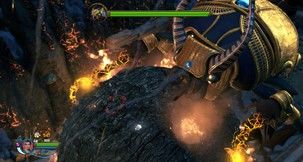 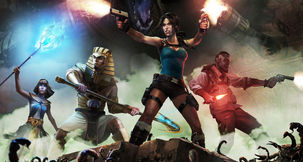